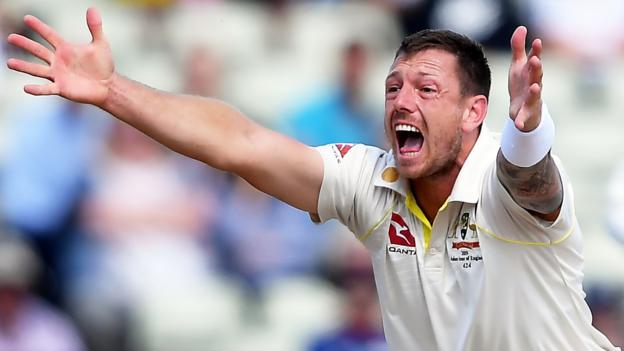 Australia captain Tim Paine says fast bowler James Pattinson has “let himself down” after being found guilty of his third code of conduct breach of 2019.

It means Pattinson will miss the first Test against Pakistan in Brisbane for disciplinary reasons.

Cricket Australia took action after the 29-year-old used abusive language towards an opponent during Victoria’s defeat by Queensland last week.

“I made a mistake in the heat of the moment,” said Pattinson.

“I’m gutted to miss a Test match, but the standards are there for a reason and the fault is mine.”

The exact details of Pattinson’s latest offence have not been revealed, but he was found guilty of a level-two breach relating to personal abuse of a player, which was enough to trigger a one-match ban.

In a statement, the governing body said the bowler “apologised immediately and unreservedly to the opponent and the umpires, and did not contest the charge”.

“He knows he’s let himself down,” added Paine.

The first Test starts on Thursday (00:00 GMT), with the concluding match in the two-Test series taking place from 29 November in Adelaide.