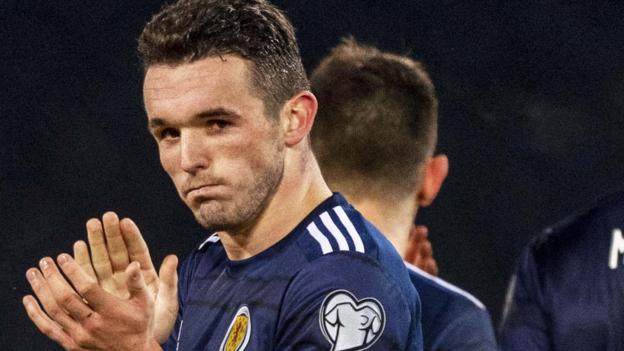 Talisman John McGinn says a Scotland team is being assembled to “make the nation proud again” in their bid for a place at Euro 2020.

The Scots have not made it to a major tournament since 1998 and, despite a poor qualifying campaign, are two play-off games away from qualification.

McGinn scored twice in Tuesday’s 3-1 win over Kazakhstan at Hampden as Scotland finished third in Group I.

“We’re starting to build that confidence,” he said.

“If you don’t believe we can go through then there’s no point in turning up. If we play like we did for the majority of the Cyprus game [a 2-1 win] and the second half here then no team will want to face us.

“We’ve got players like Ryan [Fraser at Bournemouth], James [Forrest at Celtic] and the other lads playing at the top of their game as they’re showing in Europe as well as with Celtic.

“We’re at the top of our game and hopefully we can show that under the pressure of the March matches.”

McGinn was once again the standout performer for Steve Clarke’s side against the Kazakhs.

Behind at half-time to Baktiyar Zainutdinov’s stunning strike, Scotland were only roused when the Aston Villa midfielder’s deflected free-kick crashed into the net, with a second following late on.

“[At half-time] we thought, ‘Oh no, not another one of these nights’, but it’s important to go and give a little spark in the second half,” he said.

“It was a freezing Tuesday night and the game means nothing really to them, but to us it was massively important to get a rhythm together.”

It is no secret that Clarke has struggled to find goalscorers for Scotland. Celtic’s Leigh Griffiths is the most obvious choice, but has not pulled on a dark blue shirt since Scotland beat Albania in September last year. Even then, he only has four goals in 19 appearances.

Dundee United’s Lawrence Shankland has been drafted in from the Scottish Championship, while Eamonn Brophy was in Clarke’s most recent squad despite scoring just three goals for Kilmarnock all season.

However, central midfielder McGinn could mean Scotland can live without an established number nine. This campaign he has scored seven goals – six in his past three games – leaving him as his country’s top scorer form the qualifiers. Not bad going considering he did not score in his first 15 caps.

It also puts him level with Belgium’s Romelu Lukaku, with one more than Poland’s Robert Lewandowski and World Cup winner Oliver Giroud, and two strikes more than Eden Hazard of Belgium and Real Madrid.

“I think it helps me that Nasiy [Steven Naismith] wants to link the play and I can feed off the scraps, but if I can help the team and the country with goals then I’m happy to do so,” McGinn said.

“I probably could have had a hat-trick tonight – that’s what the manager said. It’s being a bit picky maybe but I’m getting into positions and the important thing is the service is coming.”

‘He can lift a stadium’ – reaction

“He’s not just a good player. He lifts the whole team, he can lift a stadium. He’s got infectious quality, which is fortunate for us.”

“McGinn has just been superb. He is so dynamic. He’s been playing in an advanced role, getting past Naismith almost, and his movement is like a striker.

He mentioned he’s starting to feel a relationship there with Naismith and it’s been obvious over the last two games they have worked together really well. That’s a huge positive.”