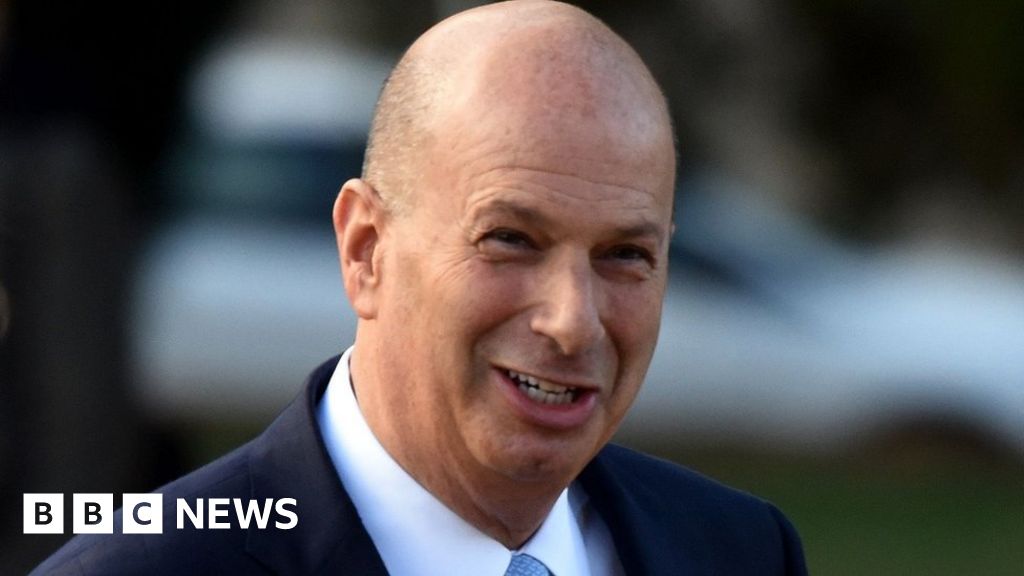 The US ambassador to the EU, Gordon Sondland, is due to testify before the impeachment inquiry into President Donald Trump, in what analysts say could be the most unpredictable appearance of any witness so far.

Mr Sondland is a close ally of Mr Trump and a key figure in his Ukraine policy.

In previous, closed-door testimony to Congress, he denied that military aid was withheld for political reasons.

But, in a major reversal, he has since revised his earlier sworn testimony.

The impeachment hearings in the House of Representatives are an effort by Democrats to establish whether President Trump – a Republican – withheld military aid to Ukraine in order to pressure the country’s leader, Volodymyr Zelensky, into announcing a corruption inquiry into Joe Biden, one of Mr Trump’s leading Democratic rivals for the US presidency.

If the president were to be impeached by a majority vote in the House, he would face a trial in the Senate which could remove him from office. However, it is widely regarded as unlikely that the required two-thirds of the Republican-controlled chamber would back this.

Wednesday is the fourth day of televised hearings.

Who is Gordon Sondland?

The wealthy hotelier appointed as ambassador to the EU by Mr Trump has found himself at the centre of the impeachment inquiry.

Diplomats have described Mr Sondland, along with other officials, as being part of a shadow foreign policy operation on Ukraine, sidestepping official channels to pressure Mr Zelensky to investigate Mr Biden and his son, Hunter Biden.

In closed-door testimony last month, Mr Sondland said he did not know about any preconditions being attached to military aid for Ukraine.

However, on 4 November he sent a three-page addendum to his earlier sworn testimony to reflect memories he said had been refreshed by other witnesses.

In particular, he said he remembered a conversation with Andriy Yermak, an aide to the Ukrainian president.

“I now recall speaking individually with Mr Yermak, where I said resumption of US aid would likely not occur until Ukraine provided the public anti-corruption statement that we had been discussing for many weeks,” Mr Sondland said.

President Trump has repeatedly denied any kind of a quid pro quo – a Latin phrase meaning an exchange of favours.

What have others said?

In testimony last Friday, US state department official David Holmes said he had overheard a phone call between President Trump and Mr Sondland in which “investigations” were said to have been discussed.

He said Mr Sondland called Mr Trump from a restaurant in Ukraine’s capital Kyiv on 26 July 2019.

According to a copy of his opening statement, Mr Holmes said: “Sondland told Trump that Zelensky ‘loves your ass’.”

“I then heard President Trump ask: ‘So, he’s gonna do the investigation?’

“Ambassador Sondland replied that ‘He’s gonna do it’, adding that President Zelensky will do ‘anything you ask him to’.”

His deposition appeared to corroborate public testimony given earlier by Bill Taylor, the acting ambassador to Ukraine, who said a member of his staff had overheard a phone call between Mr Sondland and Mr Trump in which the president asked about “the investigations” into Mr Biden.

Mr Sondland reportedly told the president over the phone from the restaurant in Kyiv that “the Ukrainians were ready to move forward”.

Observers have drawn attention to the security implications of making a call to the president from a restaurant.

Who testified on Tuesday?

During nine hours of testimony on Tuesday, senior White House adviser Lt Col Alexander Vindman told the House Intelligence Committee that a 25 July phone call made by Mr Trump to Mr Zelensky was “improper” and had left him in “shock”.

“Frankly I couldn’t believe what I was hearing,” Col Vindman said.

“It is improper for the president of the United States to demand a foreign government investigate a US citizen and a political opponent.”

Also giving testimony on Tuesday, Jennifer Williams, a foreign service adviser to Vice-President Mike Pence, said she had also had had doubts about the phone call which they had monitored from a separate room.

She said Mr Trump’s reference to Mr Biden in the 25 July call had been “unusual” because it delved into domestic US politics.

“The reference to Biden sounded political to me,” she said.

Learn more about the impeachment inquiry