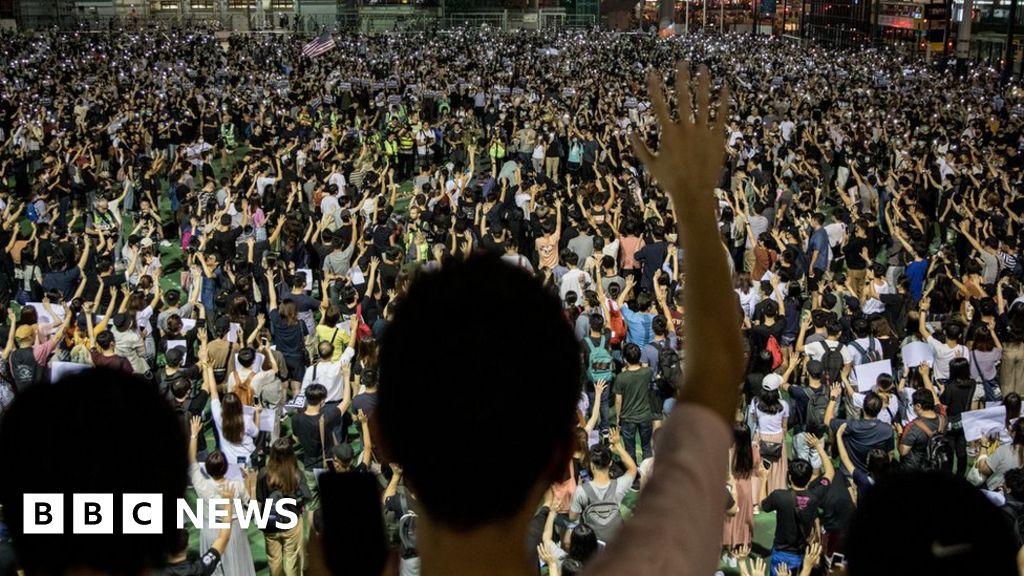 The child, who cannot be named, was arrested on his way to school the day after a demonstration in October.

He admitted causing criminal damage by spray-painting slogans on a police station and a metro station, and will be sentenced next month.

There have been more than 5,000 arrests since the protests started in June.

A number of these have been children between the ages of 12 and 15, although this is the first time one of them has been convicted.

The officer then followed the boy home and waited outside all night, according to South China Morning Post.

When the child left for school at 07:00 (23:00 GMT) the following morning, the officer intercepted him and conducted a search of his home, where black paint was found.

The boy’s lawyer, Jacqueline Lam, told the court he was held overnight at a police station after his arrest, which had been an “important lesson” for him.

Protests first started in June, sparked by a proposed bill that would have allowed the authorities to extradite criminal suspects to mainland China.

Hong Kong is a part of China, but as a former British colony enjoys freedoms not seen on the mainland.

Although the bill itself has been withdrawn, protesters are continuing to demand an inquiry into police brutality, and amnesty for everyone who has been arrested.

But ultimately, the movement has at its root a fear – especially among young people – that their unique identity is under threat from China.

This week, they have focused on a siege of Hong Kong’s Polytechnic University (PolyU) campus, which turned into a fiery battleground with police firing tear gas and rubber bullets at protesters. In turn, demonstrators threw Molotov cocktails and shot arrows.

More than 1,000 people have been arrested so far and accused of rioting, while hundreds of others have fled the campus amid a shortage of food and hypothermia-inducing temperatures. Police said hundreds of the protesters were under the age of 18.

Although the siege is nearing an end, dozens of people remain inside.