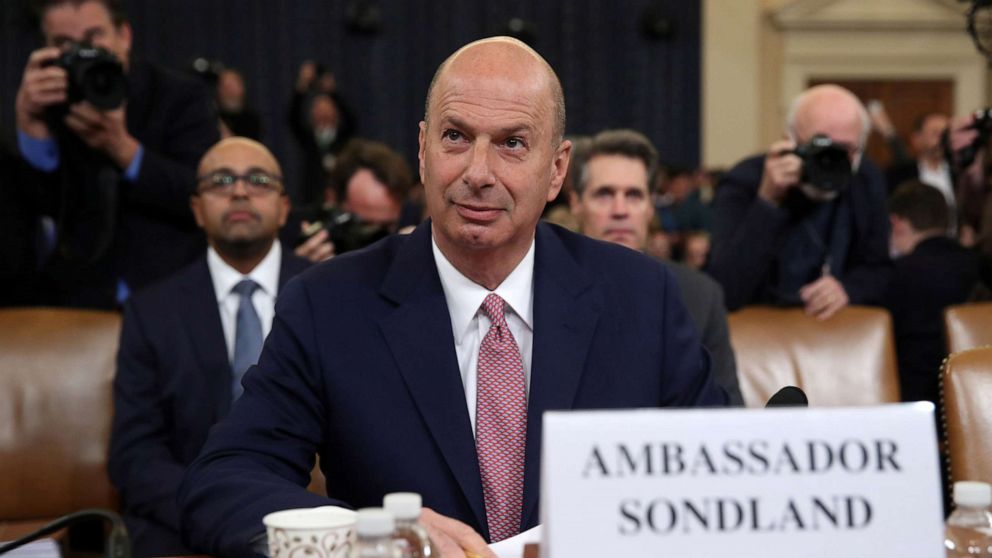 U.S. Ambassador to the European Union Gordon Sondland testified on Wednesday that there was a “quid pro quo” with Ukraine and that many in the Trump administration were “in the loop.”

The Ukrainian president would get a meeting at the White House with President Donald Trump if he opened investigations into former Vice President Joe Biden and his son, Hunter, according to Sondland, who noted that it was his “presumption” that nearly $400 million in military aid would be withheld as well, although he said Trump never told him directly that it would be.

ABC News Chief Legal Analyst Dan Abrams goes through Sondland’s testimony on “Start Here” and questions whether Democrats were able to make their case in the impeachment inquiry to the public.

“I don’t think there’s any question that the Democrats have demonstrated that the president was demanding investigations in exchange for a White House visit, in exchange for aid, but that doesn’t necessarily mean he gets impeached and removed from office,” he says.

The impeachment inquiry was top of mind for Democrats at the Democratic debate in Atlanta last night, but all eyes were also on South Bend, Indiana Mayor Pete Buttigieg after his recent surge in the polls in Iowa.

‘Saddened, disturbed and angered’: A food worker at a Texas elementary school has been arrested after allegedly placing a small hidden camera inside a boy’s bathroom.

‘Really proud’: As Apple broke ground at its newest facility, in Texas, CEO Tim Cook said the company was proud to make its “most powerful computer ever” in the U.S., and opened up about having the president’s ear and navigating business in China amid political tripwires and an ongoing trade war.

‘False statements’: Former “Empire” actor Jussie Smollett has filed a counter lawsuit against the city of Chicago, claiming that authorities “maliciously” prosecuted him after he claimed he was attacked by two masked assailants in January.

From our friends at FiveThirtyEight:

‘What went down in the fifth Democratic debate’: One thing was certain though: Democratic candidates seemed less willing to see how far they could push each other to the left on big policy ideas. Some of the lower-tier candidates like Klobuchar and Booker managed to deliver strong performances this evening, as well. Tonight could prove pivotal for Booker’s future in the race, too, as he’s still a long shot to qualify for the Dec. 19 debate.

Thanksgiving is a little more than a week away but some residents in Wisconsin have been watching one star turkey for weeks.

That’s because a bird has been walking from home to home, keeping in step, with the postal worker who delivers the mail to the neighborhood on Tacoma Drive in Waukesha County.

“OK, seriously. This turkey has been stalking the mail truck throughout the entire neighborhood,” resident Sherry Michaels said in a video she posted to Facebook on Monday. “Oh my God. … This is so funny.”

“I can’t say he’s annoying. It’s Thanksgiving,” the mailman said. “Too close to his holiday.”