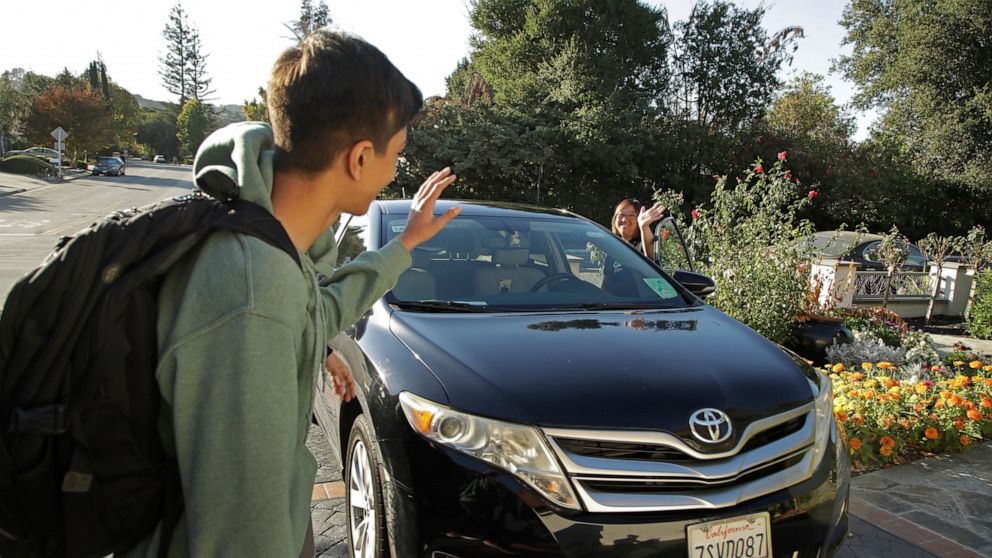 When Deb Fink heard about a company that could drive her 9-year-old son to his after-school program, she balked at the idea of putting him in a car with a stranger. But faced with the unrelenting pressure of driving him where he needed to go in the middle of her workday, she decided to give it a try.

Now she is sold, and grateful for the handful of ride-hailing companies that have emerged to resolve a dilemma many parents face: How is it possible to pick up children from schools that end at 3 p.m. and drive them to multiple activities across town, all while holding a full-time job?

The ride-hailing companies enable parents to summon a car — and in some cases childcare — for their little ones through smartphone apps. Among them are HopSkipDrive, Kango and Zum, hatched as startups primarily led by working moms as ride-hailing becomes a ubiquitous part of digital life. Together, the companies have driven more than 1.4 million children in 16,000 schools, primarily in California but with a growing presence in Colorado, Texas and Washington, D.C.

Sara Schaer, cofounder and CEO of Kango, says her company wants to be a solution as soon as parents run up against the challenge of juggling work and family, rather than having them wait for their child to turn 6 or 7 or 8 when “the damage is done” and “you’ve had to dial back on your career, you’ve not been able to enroll them in certain activities that you wanted to get them started early on, or you’ve had to move closer to where the day care is, or have limited your choices in that way.”

The demand for such services has been so high in some places that companies struggle to provide enough drivers. Others face hurdles convincing parents that a stranger hired by a ride-hailing company is trustworthy enough to ferry their most precious passengers. They have distanced themselves from mainstream heavyweights Uber and Lyft, which have been hit by lawsuits accusing drivers of assaulting passengers.

To allay concerns, companies catering to kids claim to screen drivers more extensively, checking their fingerprints and requiring them to have childcare or parenting experience, sometimes describing them as “nannies on wheels.” Drivers and children are given passwords that must match, and parents can track a child’s whereabouts in real-time through the app.

“Every parent is going to be naturally skeptical, and we built it with that in mind,” said Joanna McFarland, CEO and co-founder of HopSkipDrive, which operates in five states. “As a parent, you may not know your child’s friends’ parents or you may not know who the bus driver is. It’s really no different, but with this you have that tracking capability, and you know they’ve gone through that vetting process.”

Fink’s son initially rode with another child when they started getting rides from HopSkipDrive, easing his discomfort about getting in the car with a stranger.

“We love it,” said Fink, an educator in Berkeley, California. “We had some issues with the driver giving the kids candy, or the driver not knowing the password, but for the most part I feel very comfortable and confident.”

Zum, which operates in seven states, drives children aged 5 to 18 and HopSkipDrive serves ages 6 and up. Kango, which operates in California, will pick up babies, and they request — but don’t require — that a caregiver accompany children under 2 years old.

Unlike a babysitting arrangement, parents cannot interview candidates in advance or hire the same recurring driver using HopSkipDrive or Zum. On Kango, parents can “meet and greet” a driver before a ride and can request one or more to be the regular driver.

If something does go wrong, many companies operating in the space require consumers to give up their right to file a lawsuit and to agree to arbitration or pre-arbitration mediation.

In places where ride-hailing services for kids aren’t available, some parents have resorted to Uber and Lyft, even though drivers for those companies are not supposed to pick up solo passengers under 18.

Megan Schade occasionally calls an Uber for her 14-year-old son, who she describes as street-savvy, with good intuition and an “intimidating presence.” If she had a daughter, the Brooklyn mom said she most likely would not send her in an Uber.

“At least with the driving, you have a record of who’s driving your kid,” Schade said. “There’s a cyber trail.”

Other parents said they wouldn’t take the risk.

“All it takes is one bad person who’s willing to risk their entire Uber career on hurting someone or kidnapping a kid,” said Jeanne Solomon, a Brooklyn mom with a 14-year-old son.

The stakes are even higher for companies that have built their business model around children.

“Even one sort of negative incident could sink a company, and so I think the care that these companies need to take to ensure that every ride is a good ride is much higher,” said Arun Sundararajan, a professor at New York University’s Stern School of Business and author of The Sharing Economy.

Some ride-hailing services have linked up with schools — shuttling students to sports games and internships and replacing traditional buses — and that has helped them build credibility with parents.

So far, most of the complaints against these types of companies seem to have more to do with quality of service than safety. While some parents praised them on Yelp for friendly, trustworthy drivers, others said drivers left children stranded, showed up 30 minutes late, canceled rides at the last minute or were frequently unavailable.

Alpa Kohli was among the first parents to use Zum to send her sons to school, cutting her morning commute from about an hour-and-a-half to fifteen minutes.

“I honestly think that for working parents, time is money,” said Kohli, a content developer at Microsoft.

Not everyone can afford the services, however, and some companies have already raised prices. That could create an economic divide, where one socioeconomics class has access to a digital platform full of mobility options while another does not, said Susan Shaheen, co-director of the Transportation Sustainability Research Center at U.C. Berkeley.

In Fink’s case, the 2.5-mile ride costs $18 a day, more than she could normally afford. But the after-school program her child is enrolled in subsidizes the cost, she said.

“I would say it’s an elite service,” Fink said. “It’s something that people can only use sporadically, or if they use it regularly, they need to be pretty wealthy.”