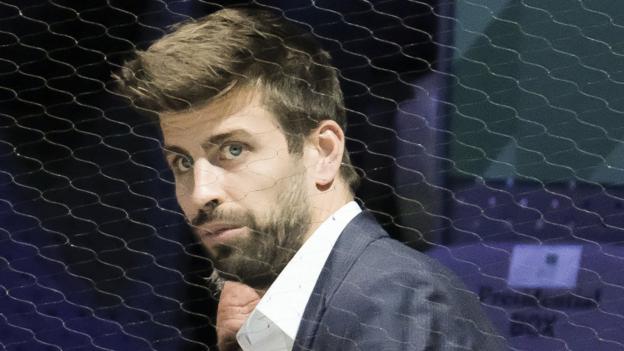 One “massive” team event, featuring both men and women, is the long-term goal as the new look Davis Cup Finals conclude in Madrid this weekend.

Eighteen teams have been competing for the title over just seven days, with Wednesday’s matches not finishing until 04:04 GMT on Thursday morning.

A rival men’s team competition will be staged in just six weeks’ time, when the inaugural ATP Cup takes place in Australia.

“The calendar is probably the number one issue for everyone in tennis,” according to Kelly Fairweather of the International Tennis Federation, which has licensed the Davis Cup to Gerard Pique’s investment group Kosmos.

“It’s not getting any easier by the addition of events. A year ago at the ATP Finals we had some of these discussions, so we’re hoping to pick that up again. Wouldn’t it be wonderful for tennis to have one massive team event?

“Sport is so competitive anyway. I don’t think we should be really competing among ourselves.”

The ITF will be encouraged by the comments Novak Djokovic made earlier in the week. The 16-time Grand Slam champion, who is president of the ATP Player Council, said he did not believe the Davis Cup and the ATP Cup could “coexist six weeks apart” in the long term.

“Obviously we have to be sensitive to all different parties,” Fairweather said in an interview on BBC Radio 5 Live Sports Extra.

“But if you’ve got Novak saying that, that hopefully opens the door for a discussion with the ATP. From an ITF point of view, wouldn’t it be fantastic to also have a joint men’s and women’s World Cup together? That would be sensational. It’s an ambition.”

The immediate future of the Davis Cup Finals, however, may be Madrid. The Spanish capital is keen to extend its two years as hosts, and Fairweather says the ITF is sympathetic to the idea of staying in Madrid for an extra year.

While the event remains just one week long, doubles matches may be shortened as they are on the ATP Tour. Deciding points at deuce, and a ‘match tiebreak’ rather than a third set, should mitigate to some extent a sequence of extremely late finishes.

Fairweather also revealed they expect to lose money for the first three years.

“I think if you look at the business plan, the fourth year is really where we as partners are hoping to see this turn into a profit making venture. There are areas in particular on the media rights side that have a huge amount of room for growth.”

Kosmos is investing $80m (£63m) a year into the competition, which includes $20m in prize money and a $44m licence fee to the ITF.

An additional $45m a year has been earmarked to develop other formats, such as a mixed team competition and a winner takes all event.

“A winner takes all with a big pot of prize money [with a working title of the Majesty Cup], that’s something that’s under discussion,” Fairweather added.

“We’ve just had expressions of interest from almost 10 cities that are keen to put on the Hopman Cup [the mixed team event traditionally staged in Australia in January – before the introduction of the ATP Cup].”

“Gerard [Pique] really wants to be innovative, he wants to really provide an incentive for the players to come and do something different, which is not week in week out on tour events.

“The mixed team event has a huge amount of potential, and that’s something that we want to capitalise on.”