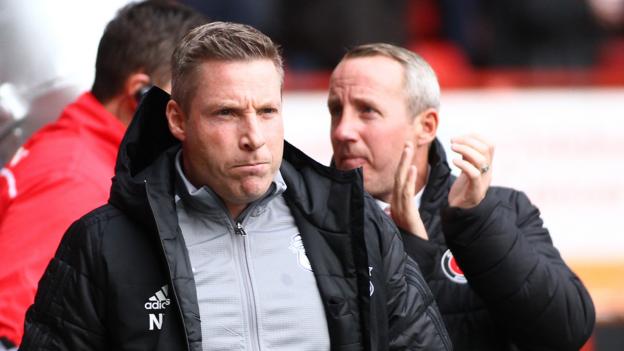 Cardiff City came from two goals down to salvage a point at Charlton Athletic in Neil Harris’ first game in charge of the Bluebirds.

Harris marked his first game by handing starts to forwards Gary Madine and Callum Paterson, but it was the Addicks youngsters who made the difference in the first half.

Charlton looked threatening all afternoon on the counter-attack and both their goals came on the break, with Macauley Bonne supplying Conor Gallagher for the opener before Erhun Oztumer set Jonathan Leko free to double the lead.

Cardiff’s Junior Hoilett had a penalty saved early in the second-half by Dillon Phillips before Nathaniel Mendez-Laing halved the deficit to set up a grandstand finish.

And it was Harris’ substitute Lee Tomlin who drew the Bluebirds level as Joe Bennett found the midfielder with a yard a space in the middle of the 18-yard box and he took full advantage.

The result leaves Charlton without a win in five games as the number of injury problems facing Lee Bowyer continues to mount.

Cardiff will be encouraged by the second-half performance under new manager Harris but the defensive frailties which have been an issue all season were once again evident at The Valley.

The Bluebirds had the first clear chance of the afternoon when Mendez-Laing beat two defenders before crossing low to Paterson, who could only hit the side netting from six yards out.

And the visitors were made to pay when Bonne ran freely down the right before beating Bennett and Curtis Nelson to cross into the six-yard box and Gallagher reacted quickest.

Things went from bad to worse for Harris’ Cardiff as Oztumer found himself in acres of space with all the time in the world to put Leko through on goal and the West Bromwich Albion loanee made no mistake.

The visitors looked comfortable as the first half ended but Harris’ half-time team-talk definitely had an effect and the Bluebirds looked a different team to start the second half.

Cardiff pressed forward and were awarded a penalty when Madine was pulled down in the centre of the box when challenging for a cross.

With Joe Ralls and Robert Glatzel both sidelined through injury, Hoilett stepped up, but his strike was tame and Phillips got down to his right to save.

But Charlton’s two-goal lead did not last much longer as Mendez-Laing got a shot away following Leandro Bacuna’s blocked attempt, leaving Phillips with no chance.

And it was Harris’ substitution that made the telling contribution as Bennett’s cross found Tomlin, who dropped the shoulder and rifled a shot into the bottom corner, sparking celebrations from the travelling fans behind the goal.

It could have been even better for Harris and Cardiff when his other substitute Omar Bogle raced clear, but the striker was denied by Phillips.

Both sides sensed a winner as the game opened up late on and Bonne almost snatched it at the death for Charlton, but Lee Peltier got his body in the way to seal the draw for Cardiff