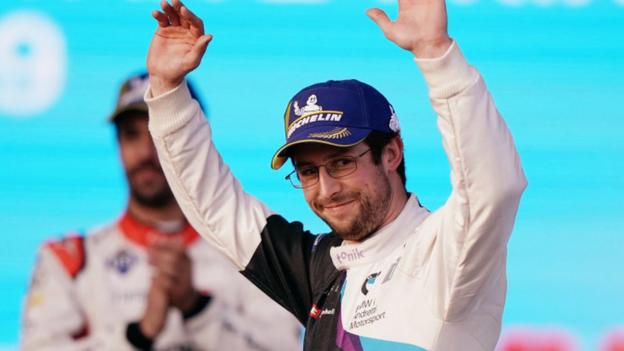 Alexander Sims took his first Formula E win in an incident-strewn second race of the season in Saudi Arabia.

The British BMW i Andretti driver finally converted a pole position into victory on a day that saw several collisions on the tight, dusty desert circuit at Ad Diriyah.

“That’s a bit more like it – I might crack a smile on the podium,” said a typically dry Sims over team radio.

Sims took pole in the first race on Friday, but Sam Bird won that race.

Sims finished eighth on Friday and now leads the championship by eight points from Stoffel Vandoorne and nine from fellow Briton Bird.

Sims’ team-mate Max Gunther was second over the line on Saturday but is under investigation after overtaking two rivals under the safety car.

Lucas di Grassi came third for Audi Sport Abt Schaeffler after a battling performance, ahead of Vandoorne, who had another solid drive for Mercedes, who are making their debut in Formula E this season alongside another German giant in Porsche.

After losing several positions he was finally punted into the wall of the street circuit near Riyadh by Pascal Wehrlein in the Mahindra.

It was a typically entertaining race for Formula E – the second contest of the weekend involved two safety cars and a full course yellow, after the field started racing again before Robin Frijns’ stricken Virgin car had been cleared from the circuit.

Defending champion Jean-Eric Vergne had another miserable race, starting last and finishing outside the points.

“That was pretty much a dream race,” said Sims before the podium celebrations. “Crossing the line was an amazing feeling – there’s so many lessons we’ve learnt.”