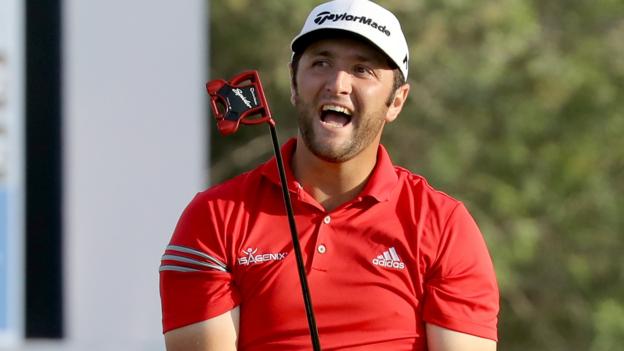 Spain’s Jon Rahm strengthened his chances of winning the European Tour’s Race to Dubai by shooting a six-under 66 to share the third-round lead at the season-ending Tour Championship.

Rahm will take the title if wins on Sunday and money-list leader Bernd Wiesberger does not come second.

Austrian Wiesberger is struggling on two under overall, 13 behind Rahm.

England’s Tommy Fleetwood, who would also win the Race to Dubai if he won the tournament, is four adrift of Rahm.

Northern Ireland’s Rory McIlroy, who cannot win the Race to Dubai, moved to within two shots of Rahm and Frenchman Mike Lorenzo-Vera, who is aiming to become the first wire-to-wire winner of the Tour Championship.

McIlroy shot a seven-under-par 65 to move to 13 under.

The four-time major winner started with two birdies and that set the tone, picking up an eagle on the par-five seventh and a birdie on the following hole as he made the turn in 31, five under for the day.

Another two birdies followed, at the 14th and 16th, before McIlroy got himself out of trouble on the 18th, scrambling for a par following a wayward approach to finish with a bogey-free round.

Five players started the tournament with a chance of winning the season-long Race to Dubai, with a $5m bonus pool to be split by the top five money-earners.

And there are a bewildering number of ways any of the quintet could win the title, dependant on how their rivals fare.

Wiesberger started the third round at the top of the Race to Dubai rankings, but a 73 saw him drop to two under for the tournament, opening the door for Rahm.

The Ryder Cup player carded a classy 66, and opened a sizeable gap over his closest other challenger in the Race to Dubai, Fleetwood, who managed three birdies in his 70.

Rahm – who would become only the second Spaniard to win the Race to Dubai, or its predecessor the Order of Merit, after the late Seve Ballesteros – made seven birdies, including one on the 18th.

Open champion Shane Lowry and England’s Matt Fitzpatrick both need to win the tournament but even then their hopes of winning the overall title are slim. Lowry will start the final round 10 shots behind Rahm, with Fitzpatrick nine back.

Scotland’s Robert MacIntyre all but sealed the European Tour’s rookie-of-the-year title – as the best-placed debutant in the Race to Dubai rankings – with a four-under-par 68 that moved him 10 shots clear of closest rival Kurt Kitiyama.

The 23-year-old from Oban reeled off six birdies – five in the opening seven holes – as he moved to three under for the tournament, while Kitiyama, from the United States, carded a five-over 77 to finish on seven over with one round to play.

MacIntyre went into the tournament in 11th place in the Race to Dubai, one place ahead of Kitiyama, and was just one shot ahead of his rival at the start of the third round.

Barring a staggering turnaround on the final day MacIntyre , who finished sixth on his Open debut at Royal Portrush this year and has claimed seven top-10 finishes in 2019, will join the likes of Rahm, Brooks Koepka, Sergio Garcia, Nick Faldo and Sandy Lyle in winning the Sir Henry Cotton Rookie of the Year award.