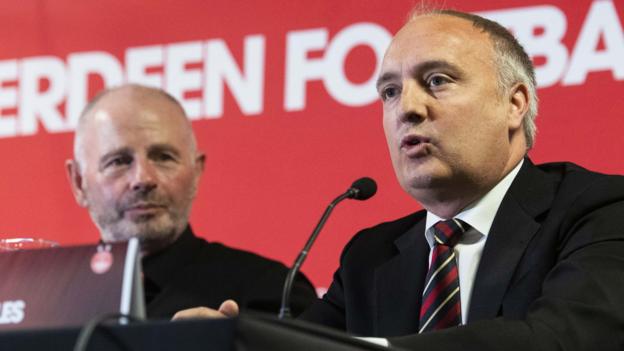 Atlanta United president Darren Eales says there will be “no blank cheque” from their philanthropist owner after a £2m investment in Aberdeen.

Businessman Dave Cormack, who is based in Atlanta, will invest £3m as he becomes Dons chairman next month.

“There’s no intention for us to do any further investment or take over the club,” Eales told BBC Scotland.

“We have just built the Mercedes Benz Stadium – one of the best stadiums in the world. That is an area we think we can help with our expertise in terms of best practice in building the stadium in Atlanta.”

Both Cormack, who will succeed long-serving Stewart Milne as chairman, and Eales reiterated the club’s commitment to building a new stadium at Kingsford to replace Pittodrie.

“It is not just going to be the case of a blank cheque coming in,” Eales said. “It is about how we can help each other to be successful within our means.

“There are some good win-wins for both parties. Sometimes you hear of these partnerships between clubs and, for the want of a better phrase, there’s no skin in the game, but we put some money in to show our commitment.”

Eales said Atlanta had been looking for a “partner club” as they were “looking at any way we can punch above our weight”.

“Aberdeen are a perfect community club,” he said. “It is a very well run club and they were voted this year by Uefa as the grassroots community club of the year.”

Eales said the recently opened Cormack Park training ground and Aberdeen’s consistent qualification for European competition had been an attraction.

“Then you have personal relationships – Dave Cormack, who is coming in as the chairman, actually lives in Atlanta and has seen Atlanta United games and has built a relationship over the years,” he said.

Midfielder Jon Gallagher has been on loan to Aberdeen from Atlanta since the summer and Eales envisaged further cross cooperation over players.

“A good example is the scouting network,” he said. “We focus quite a lot on South America – we’ve had some great successes in terms of players coming in.

“Obviously, in Scotland, Aberdeen are on the ground in the UK, so it is helping us get intelligence on the European market.”

Software entrepreneur Cormack, who is “proud and honoured” to be succeeding Milne, said he had been looking to expand his involvement with Aberdeen after selling his own business.

“These are people coming in to support me, not to take over and, in reality, Stewart and I still own over 50% between us,” he said. “I am excited about the partnership – Darren’s well respected in England and Europe as an administrator with Tottenham and West Brom.

“This is me as an Aberdonian driving the club with a board that will still include Stewart.”