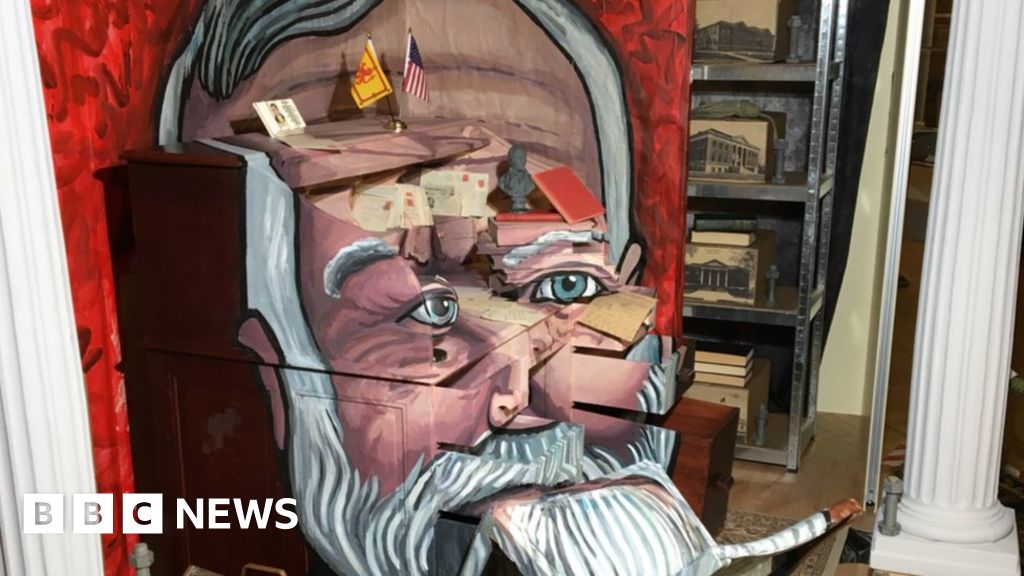 As portrait unveilings go, it’s an unusual one.

Behind a roped off section of the Carnegie Birthplace Museum in Dunfermline, artist Calum Colvin is adjusting a 3D installation. Close up, it’s a vividly painted desk and chair, in a study, complete with books and box files, flags and a small globe.

But step back a bit and the trompe-l’oeil illusion takes shape, with the face of the Scottish-American steel baron turned philanthropist, Andrew Carnegie, emerging from the scene.

It’s a work in progress. Mr Colvin, professor of fine art photography at the University of Dundee, has been working on site on the project for the last few weeks.

“It’s the opposite of what people normally see with my work,” he says.

“They would usually see the photograph and try and work out if it’s a collage, or an installation but this way, they get to see the origin first, the 3D image. It’s a live art project in a way.”

Born in 1835 in Dunfermline, Carnegie was an eminent industrialist who became the world’s richest man after making his fortune in the US. His legacy can be seen today in more than 2,500 libraries.

But he was also a controversial figure with some dark chapters in his career, not least the 1892 Homestead steel strike which resulted in a number of deaths.

Both business and philanthropy decisions would have been made behind the same desk, which Calum Colvin recreates in the centre of his portrait.

It’s a detail which convinced Kirke Cook, curator of the museum, that he was the artist for the job.

“There is a long history of portraiture associated with Carnegie. The first was in 1935, on the centenary of his birth. That portrait was sent to every Carnegie Library.”

In 1981, the Carnegie Museum of Art in Pittsburgh co-commissioned Andy Warhol to make a new portrait. There hasn’t been one since.

“When I was asked to make it, I was aware of the Warhol image and I wanted to create something graphic, not to go down the old portrait route,” says Calum Colvin.

“As it turns out, I’m between both of those. I’m aware it’s another guy with a beard and what do you do with that? It’s been interesting working here in the museum, surrounded by so much detail about his life. I could take a break, and go down to the basement to find more material. It was a very hands on research experience.

“It’s an amazing story and to be able to do that here in the museum attached to the tiny room in the house where he was born, has been great.”

Now, his task is to turn the 3D set into a 2D portrait, which will hang on the wall of the museum.

Visitors have until Sunday to see the installation before the museum closes for the winter and for refurbishment.

And perhaps next spring, there’ll be a more conventional unveiling to attend.