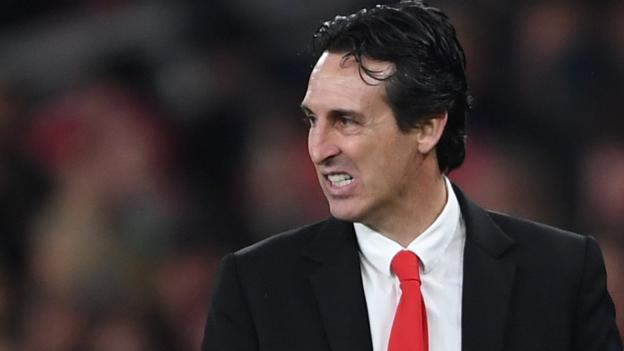 Arsenal manager Unai Emery says he is only focused on “today and tomorrow” as he prepares for his side’s Europa League tie against Eintracht Frankfurt.

The Gunners boss is under pressure after a winless run in his last six matches across all competitions.

Arsenal are nine points worse off than at the same stage last season with just four wins in 13 Premier League games.

“My job is to prepare for the match, to show the best performance in front of our supporters,” Emery said.

The Spaniard’s side host Frankfurt at Emirates Stadium on Thursday and sitting top of Group F, four points clear of Standard Liege and their German opponents.

On Sunday, a number of Arsenal fan groups called for “urgent action” over the “state of things” at the club.

“My focus is only today and tomorrow, to do all the things that we have worked on here at the training ground,” he added.

“We know our supporters were disappointed by the draw against Southampton, but we have the perfect chance to reconnect with our supporters.

“Our wish is that every supporter tomorrow helps the team, we need them.”