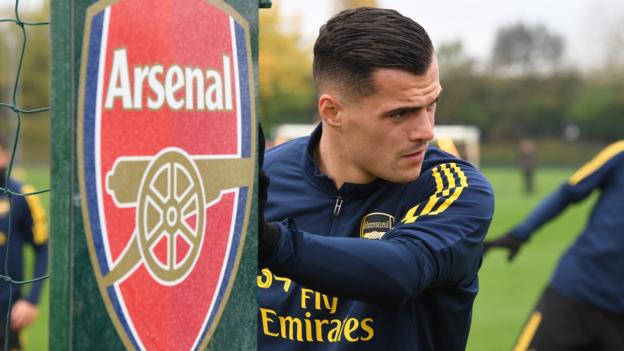 Xhaka was stripped of the captaincy after reacting angrily to jeers from Gunners fans while being substituted during a 2-2 draw with Crystal Palace.

“He’s in the group and has the possibility to play tomorrow,” said boss Unai Emery.

“I hope every supporter supports the team.”

He added: “Xhaka’s comeback is going to be important to us.”

The Swiss midfielder has not played for the club since he swore and gestured towards Arsenal fans while being substituted during the match against Palace on 27 October, although he did feature for Switzerland in November’s final round of European Championship qualifiers.

Xhaka explained in a statement that he had “reached boiling point” following threats by supporters towards his family, and was offered counselling by Arsenal.

Meanwhile, manager Emery is facing fresh questions over his job at Emirates Stadium this week, after a number of fan groups called for “urgent action” to be taken over the club’s struggles in the league.

“I know some teams come here and are fearless against us and we need to be strong for our supporters but first we need to reconnect with them,” he said.

“But really, my wish is tomorrow that the supporters and every supporter helps the team because we need them.”

Arsenal will definitely be without Dani Ceballos for Thursday’s match, with the midfielder recovering from a hamstring injury. Full-backs Hector Bellerin and Sead Kolasinac will face late fitness tests, also on hamstring problems.

Arsenal, who are top of Group F, will qualify for the Europa League last 32 with a draw against the German side.

They will go through regardless of the outcome at the Emirates if Standard Liege lose their match against Vitoria Guimaraes.

Arsenal beat Eintracht 3-0 in the reverse fixture at the Waldstadion thanks to goals from Joe Willock, Bukayo Saka and Pierre-Emerick Aubameyang, who replaced Xhaka as club captain.

Eintracht are 10th in the Bundesliga, having lost 2-0 at home to Wolfsburg last Saturday.

German defender Shkodran Mustafi is expected to feature for Arsenal, having started all four of their Europa League games despite having yet to feature in the Premier League this season.

Mustafi failed to find a suitable club after being told he could leave the Emirates in the summer and has been out of favour in the league, although he was named on the bench for the first time in the current campaign for the 2-2 draw with Southampton on Saturday.

“I am a player of Arsenal and I’ve got a contract with Arsenal for one and a half more years.