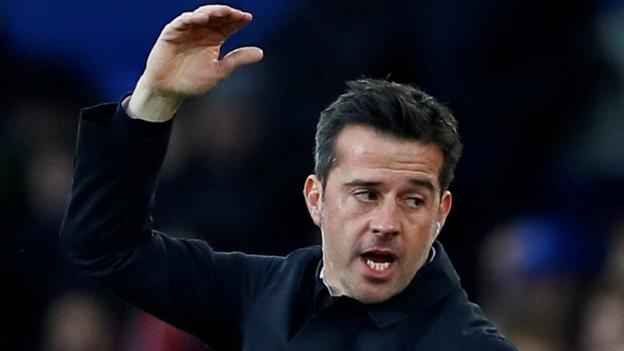 Everton boss Marco Silva says he is not losing sleep amid uncertainty over his future.

Silva’s side are 16th in the Premier League, with some Everton fans calling for his sacking after last Saturday’s 2-0 home defeat by Norwich.

Director of football Marcel Brands says everyone at the club “must stick together”.

“Of course I sleep,” said Silva. “When you give your maximum every day, why would you not sleep?”

Everton go into the weekend two points above the relegation zone, with their next three league matches all against teams currently in the top four, going to Leicester on Sunday and Liverpool next Wednesday before hosting Chelsea the following Saturday.

Silva said he had not been given an ultimatum by Brands before the trip to the King Power Stadium and would not be distracted by the intense discussion over his future.

“I don’t waste my time thinking about that. Not one minute,” he said. “My focus is on what I can control.”

There have been suggestions that Silva has only kept his job this week because of a lack of alternatives and a difference of opinion between majority shareholder Farhad Moshiri and chairman Bill Kenwright.

After staying silent throughout a turbulent few days, Brands gave an interview to Everton’s club media, released less than half an hour before Silva’s general press conference.

“Of course, we know in sport, as always, you have to perform – that’s me, the manager, the players, for everyone,” Brands said.

“It’s also important, after a couple of years of instability, to stick together in this situation. It is important that everyone has the feeling that we can turn this around to better results.”

Some are not convinced Everton can turn the situation round.

On Monday, former Liverpool defender Jamie Carragher said he could see a situation where Everton were still on their current tally of 14 points on New Year’s Day – losing their next seven Premier League games.

“I don’t have the capacity to look five, six or seven matches into the future,” said Silva.

“Nothing is easy in football. If you start losing focus and wasting energy by thinking about Anfield, Chelsea and Manchester United, you are not focusing on the most important thing, which is Leicester.”

Everton’s trip to Leicester is not made easier by the knowledge Fabian Delph, Morgan Schneiderlin, Seamus Coleman and Theo Walcott are all likely to miss out through injury.

Brands did confirm Brazilian striker Richarlison – who has scored just three league goals this season – is close to agreeing a new contract.

Silva will not find it easy to get Everton’s fans back onside, judging by the boos he endured at Goodison Park last weekend.

“I share their frustration,” Silva said. “As a manager, you always have to respect the reaction of your fans.

“Is it possible things can change? I am not 100% sure. I am not the right person to ask.

“What I can do, it is my job and obligation as a manager, is to work really hard, as I did since the first day I joined the club; try to get the right results and keep improving our football.”

Silva was backed with almost £90m of new signings in the summer of 2018 and the Toffees finished eighth last season.

But, after spending more than £100m on new players in the summer just gone, Everton have won just four league games this season.