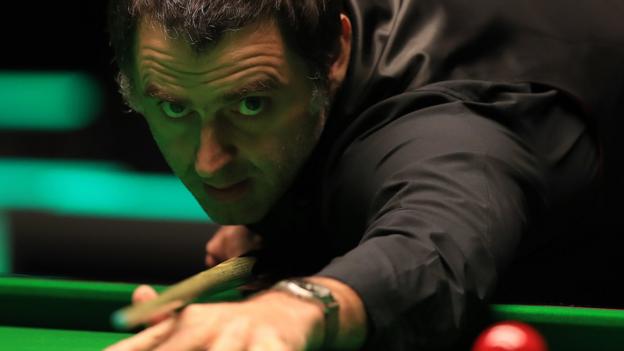 BBC Sport at the York Barbican

Defending champion Ronnie O’Sullivan ruthlessly dispatched China’s Tian Pengfei with his second successive 6-0 whitewash to reach the third round of the UK Championship in York.

O’Sullivan eased past teenager Ross Bulman in 66 minutes in his opener on Thursday.

The event’s record seven-time winner then achieved another routine victory.

O’Sullivan, 43, made breaks of 106 and 71 and will face the winner of Noppon Saengkham and Anthony McGill next.

The world number two will move to a record 37 ranking titles if he triumphs in York.

The Rocket is currently level with Stephen Hendry’s haul of 36. He is also the only player to compile more than 1,000 career centuries and has more Triple Crown event wins than anyone else.

O’Sullivan’s recent record at the Barbican Centre is remarkable, having won 29 of his 30 matches at the venue since 2014, lifting the trophy in the last two years and being beaten in the 2016 final by Mark Selby.

The victory over world number 65 Tian means O’Sullivan has won a total of 89 matches at the UK Championship, drawing him level with six-time champion Steve Davis.

Should O’Sullivan and world number one Judd Trump progress through the tournament, the pair will meet in the final, having already faced each other in the previous event, the Northern Ireland Open.