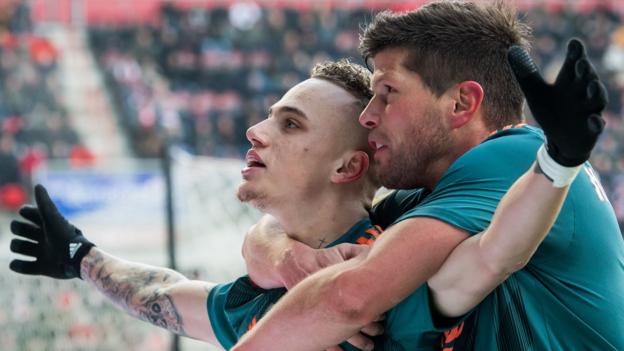 Ajax youngster Noa Lang became the first player to score a hat-trick on their league debut for the club in 60 years as the leaders fought back from two goals down to beat FC Twente.

He made it 2-2 six minutes after the restart and the comeback was sealed by Klaas Jan Huntelaar 10 minutes later.

Lang, 20, made his full-debut hat-trick and Huntelaar added another late on.

Lang, who has made seven substitute appearances for the club, is only the second Ajax player to score three on his first Eredivisie start after Henk Groot in 1959.

Victory takes reigning champions Ajax nine points clear at the top of the table, with second-placed AZ Alkmaar in action against VVV-Venlo later on Sunday.