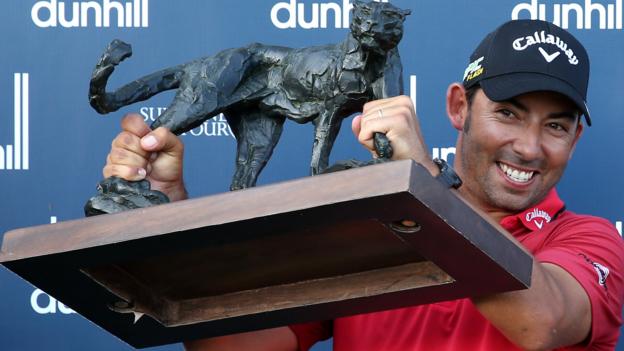 Spaniard Pablo Larrazabal survived an alarming run to capture his fifth European Tour title with a one-shot win at the Alfred Dunhill Championship.

The 36-year-old world number 261 began the final round at Leopard Creek with a three-shot lead but had six bogeys and a double bogey in his first 13 holes.

He recovered to hole from inside three feet at the last for his fifth birdie of an eventful three over 75.

His eight under total was one clear of Swede Joel Sjoholm, who had a 69.

Larrazabal, who was affected by blisters on his feet, and Dutchman Wil Besseling were seven under playing the par-five 18th in South Africa in the first event of the new season, but Besseling’s second shot embedded itself next to a stone wall guarding the green.

The 33-year-old world number 307, seeking his first European Tour win, dropped a shot and finished in a share of third with South Africans Branden Grace and Charl Schwartzel, the former Masters champion.