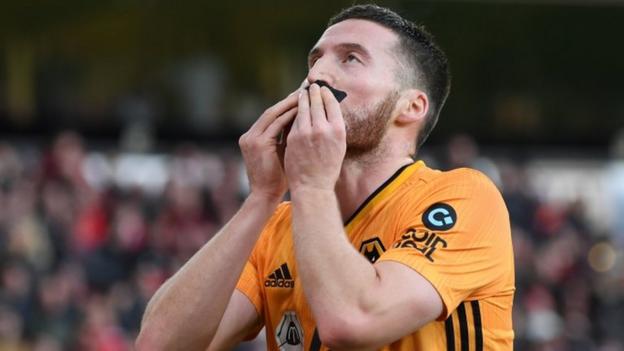 Nuno Espirito Santo’s side were second best until Doherty headed in Raul Jimenez’s cross after 64 minutes.

But they finished the game stronger as the Blades, who were fortunate not to have George Baldock sent off, hung on to extend their unbeaten run to six games.

It was a sharp contrast from earlier in the match as the visitors took the lead after 63 seconds.

Lys Mousset took a touch from Baldock’s right-wing cross before firing in his fifth goal of the season.

But Chris Wilder’s team paid for costly misses by David McGoldrick early in the second half when they were in the ascendancy.

Sheffield United, who have not lost away in the league since January, remain a place below Wolves in seventh.

Wilder would have been pleased his side continued their impressive start to the season, especially as Baldock rode his luck by avoiding a second yellow when he fouled Diogo Jota.

But it was a game where Mousset’s value was underlined once again, especially as McGoldrick showed again why he has not scored this season.

Mousset did not have much Premier League pedigree when he was at Bournemouth, scoring only five goals during three seasons after signing from French side Le Havre in 2015 for about £5m.

But the 23-year-old, who was captured by the Blades for a then-club record £10m in July, has proven a key player for Wilder’s side by adding crucial goals to the team’s defensive solidity.

Given he has scored five goals and has three assists, while his fellow strikers have struggled, the Blades’ lofty league position would be far inferior without him.

He wasted little time in scoring at Molineux and set up John Fleck for what should have been a second after 38 minutes when he nutmegged Leander Dendoncker, but the Blades midfielder’s low shot was saved by Rui Patricio.

Although McGoldrick was full of endeavour, he toiled in front of goal. The Republic of Ireland international had two chances to double the lead when the Blades were well on top after the break. Both times he could not beat Wolves keeper Patricio.

It proved costly when Doherty headed in at the back post minutes later, with McGoldrick failing to track his runner.

He was eventually substituted to be replaced by Oli McBurnie, who had a late chance to win it when he headed over, but Wilder will not mind too much about McGoldrick’s form while his team are still picking up points.

The draw meant that Wolves matched a top-flight unbeaten run last set by the club in 1973.

More pleasing for Nuno will be the way his side reacted to going behind, especially as they played against Braga in Portugal in the Europa League on Thursday.

This was their 27th game of the season and their resilience in combining both domestic and European form after a stuttering start to the campaign has been impressive.

They looked rusty as the visitors took the lead early on but once Jimenez tested Dean Henderson with a header after 18 minutes, they found their feet, and Adama Traore was a dangerous outlet down the right as he outmuscled Enda Stevens on several occasions.

Had there been better composure from Sheffield United’s forwards, the hosts may not have been able to respond, yet Doherty’s goal seemed to provide a catalyst.

It was an emotional goal as he kissed his black armband in tribute to former Wolves team-mate Benik Afobe, who has lost his two-year-old daughter.

Wolves, who handed a first Premier League start to defender Max Kilman, making him the first former England futsal player to play a full game in the top flight, pressed for a winner.

However, Sheffield United’s desperate defending kept clear-cut chances at a premium as the scores remained level.