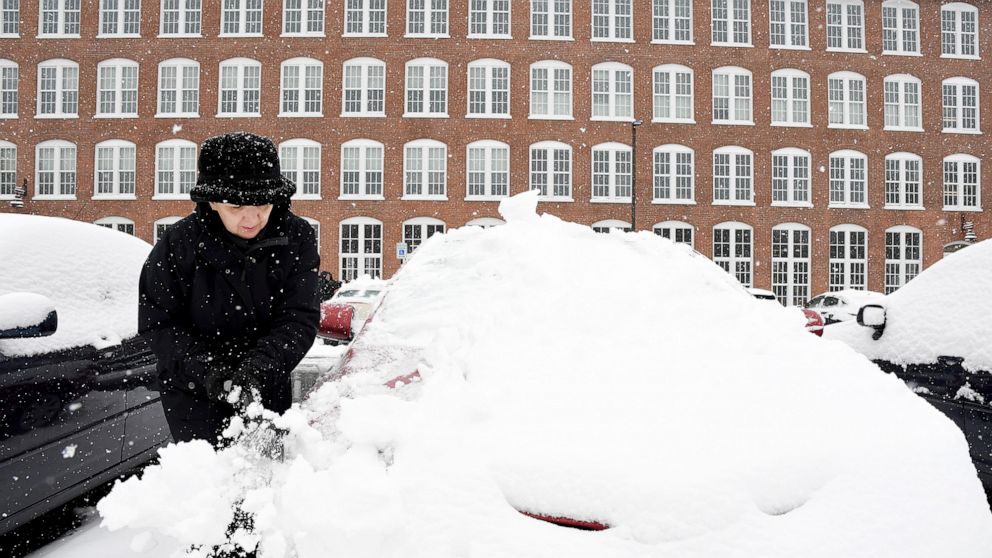 The snowstorm that doesn’t want to end coated coastal New England at the height of the morning commute Tuesday, snarling travel and closing schools.

The wintry weather that moved into New England on Sunday night has so far dropped 25 inches on Winchendon, Massachusetts, and 18 inches on North Granby, Connecticut, according to tallies from the National Weather Service.

The Boston area saw only about 5 inches of snow, but its timing could hardly have been worse.

A jackknifed tractor-trailer on Interstate 95 in Sharon blocked all southbound lanes, causing backups. The highway has since reopened.

Leigh Franco was about an hour into her ride to her job at a pharmaceutical company in Cambridge when her subway train broke down in a downtown Boston station.

The 23-year-old Melrose resident still had a few more stops, a transfer and another subway ride to look forward to. So, as passengers were being shuffled out of the station, Franco pulled out her phone to dash off an email to her colleagues.

“At this point, I’m just going to turn around and head back home,” she said. “I didn’t want to go in today anyway.”

The National Weather Service issued a winter storm warning for coastal areas of Massachusetts, New Hampshire and Maine and a winter weather advisory for southeastern Massachusetts and Rhode Island, though the storm was expected to taper off by early afternoon.

Southern Vermont also got dumped on, with Woodford getting 26 inches of snow. Nearby ski resorts Stratton Mountain and Mount Snow were relishing the fresh powder.

Dozens of school districts closed for a second day across New England. Massachusetts Gov. Charlie Baker urged people to work from home if possible and delayed the start of the work day for nonessential state employees by two hours.

In Warwick, Rhode Island, where residents were digging out from 4 inches of fresh snow, Doreen Goy worked a snowblower with steely determination and a singular focus: getting in a workout.

“I need to get to the gym,” she said as she cleared a sidewalk in front of her home.

More than 100 flights were canceled and nearly 300 more delayed at Boston’s Logan Airport on Tuesday, according to the website FlightAware. New York’s Kennedy Airport had just 16 cancellations and 190 delays, and nearby LaGuardia airport had similar numbers.

In Maine, Gov. Janet Mills originally delayed the opening of state offices, then announced that they’d be closed altogether because of the storm.

In New York City, hundreds of Brooklyn households were without power because of outages caused by manhole fires overnight. A Consolidated Edison spokesman attributed the fires to snow-melting salt that can seep into the system and corrode wires.

In New Jersey, Jersey Central Power and Light reported more than 36,000 homes and businesses were without electricity Tuesday even as the storm moved out of the region.

The snowstorm was related to the system that pummeled parts of the West and Midwest over the long Thanksgiving weekend. Duluth, Minnesota, got over 21 inches of snow, and blizzard conditions closed major highways in Wyoming and Colorado.

What seemed like one storm in New England was actually two, said Justin Arnott of the National Weather Service, in Gray, Maine.

“It’s complex from the standpoint that there’s been more than one low pressure system that has hit us in short succession. Normally we get a break — but not this time,” he said.