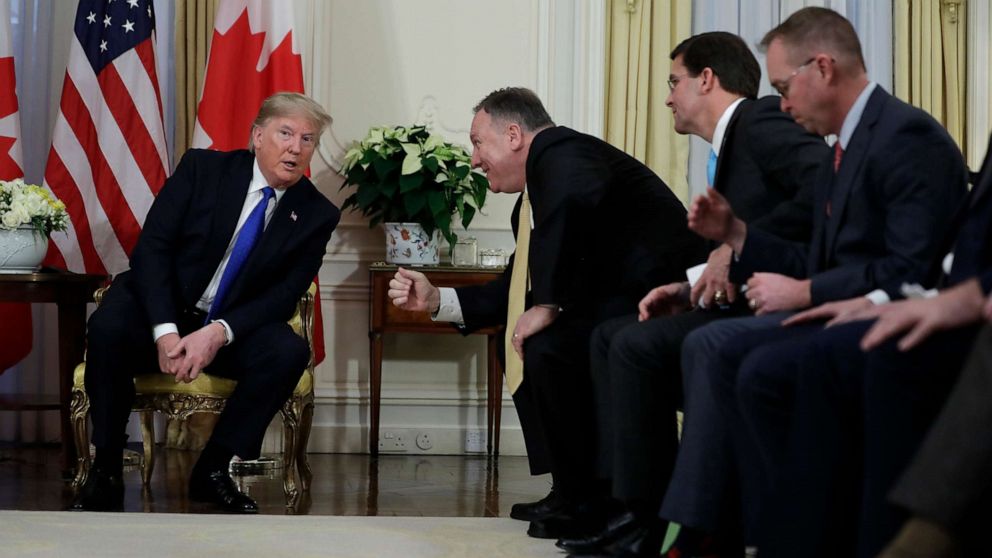 A day before the next public hearing in the impeachment inquiry into how he and his administration handled military aid to Ukraine, President Donald Trump on Tuesday said he could direct top administration officials to testify in a possible Senate trial.

The White House has blocked administration officials from cooperating with the House impeachment effort. Asked why he has blocked them from appearing as Democrats have repeatedly requested
Trump said he would like Secretary of State Mike Pompeo, acting White House chief of staff Mick Mulvaney and former Energy Secretary Rick Perry to testify but once again claimed the House proceedings are “unfair.”

“It will be fair in the Senate,” the president said during a photo op with Canadian Prime Minister Justin Trudeau ahead of the NATO summit in London., a reference to the fact that Republicans will have greater control of the process in the Senate, where they have a majority.

“I would love to have Mike Pompeo and Mick and I would love to have Rick Perry, and many other people testify. But I don’t want them to testify when this is a total fix. You know what a fix is? It’s a fix. Just think of it,” Trump said, referring to the ongoing process in the House of Representatives.

While the president is now drawing a distinction that he’d be willing allow these individuals to testify in the Senate, he has previously argued that he is fighting for the presidency in refusing compliance, warning that “future presidents should in no way be compromised.”

Trump has previously made comments about allowing high-ranking officials to testify or answer questions but has not taken any steps to make that happen.

Trump also used some of his strongest language yet in attacking the Democrat who chairs the House Intelligence Committee, Rep. Adam Schiff, calling him “deranged” and a “maniac,” accusing him of twisting his words when Schiff read an interpretation of the transcript of the July 25 call between Trump and Ukrainian President Zelenskiy.

The president predicted that the ratings will be bad for Wednesday’s first impeachment hearing in the House Judiciary Committee.

“Tomorrow, I don’t think anybody is going to watch. I won’t watch, I’ll be doing this, it is much more exciting,” Trump said.

But when asked by a reporter what he thinks he can learn from Schiff, the president said “I learn nothing from Adam Schiff” and launched into a tirade against the Democrat, who has had a leading role in the impeachment process.

“I learned nothing from Adam Schiff. He is a deranged human being. I think he grew up with a complex for lots of reasons that are obvious. I think he is a very sick man. And he lies. Adam Schiff made up my conversation with the president of Ukraine,” Trump said.

The president also claimed, as he has before, that the impeachment battle is helping him politically, saying we are “winning so big” and falsely claiming his poll numbers have never been better.