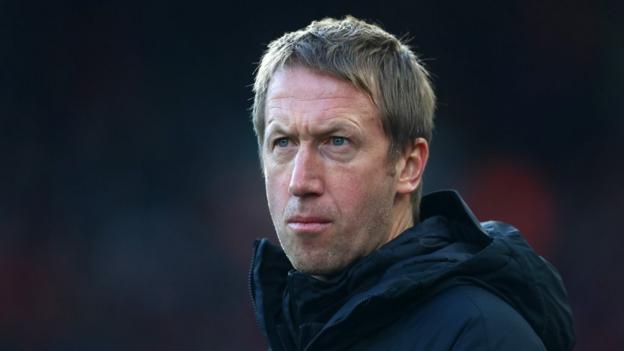 Arsenal have no new injury concerns for the visit of Brighton, although right-back Hector Bellerin will be assessed after missing the last two games because of a hamstring problem.

Brighton full-back Bernardo is back in contention following three months out with a knee injury.

@Mark_Scott_: It was a different man in charge of Arsenal on Sunday, but the same old problems at the back were still very evident.

Sorting out the Gunners’ shoddy defence is certainly not going to be a quick fix for Freddie Ljungberg, and it will be interesting to see what side he goes with after his line up at Norwich raised a few eyebrows.

On paper, this is a good first home game at the helm for him as Brighton have been poor on the road this season and look a bit blunt up front.

That said, the Seagulls ran Liverpool close at Anfield and not many teams have managed that.

VIEW FROM THE DUGOUT

Arsenal interim head coach Freddie Ljungberg: “The only way to change an atmosphere is how you play. The fans were amazing at Norwich, they got more energy the more we played in the first half. They were great, even when we went down.

“When it comes to the Emirates, fans want us to win games and play good football. The only way to try and get a good atmosphere is to try and achieve that.”

Brighton & Hove Albion head coach Graham Potter: “It was disappointing to not come away with anything against Liverpool, but I was proud of what we did.

“Arsenal are going through a transition after losing Mr Wenger, who had been there for over 20 years, and results haven’t gone as they would’ve liked with their previous coach.

“But they’re still a top club with high-quality footballers and they will be looking for a positive reaction.

“Freddie Ljungberg is in charge and knows the game well, so we’re expecting another difficult contest.”

Freddie Ljungberg is in charge of Arsenal now but nothing changes, does it? They are good going forward but still open at the back and it feels like any team can cause them problems.

The only thing that might help the Gunners is that, having watched Brighton at the weekend, I am not really sure where their goals are going to come from.