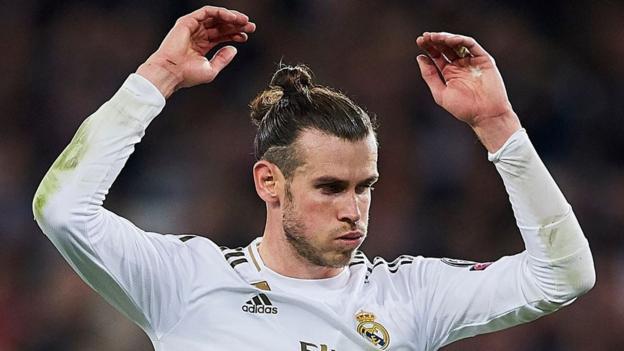 Gareth Bale “is not ecstatic” at Real Madrid but there’s “no guarantee” he will leave the Spanish club in January, says his agent Jonathan Barnett.

“He has never asked to leave,” said Barnett on the Euro Leagues Podcast.

“He has a contract with Real Madrid and as long as they want him, there’s not much anyone can do about it.”

Bale moved from Tottenham to Real for a then-world record fee of £85m in September 2013 and has also helped them win three Club World Cups, three Uefa Super Cups, La Liga once, the Copa del Rey once, as well as his Champions League successes.

However, in July he had been set to move to China on a three-year contract where he would have earned a reported £1m a week, before the deal collapsed when Real demanded a transfer fee.

At the time, Real boss Zidane said Bale’s exit would be “best for everyone” and the Welshman has since endured a strained relationship with the Spanish press and fans, who booed him during last month’s match against Real Sociedad.

Asked whether Bale was happy, Barnett said: “He’s not ecstatic.

“He has got a contract and as long as he is a Real Madrid player he will play at 100% – and do very well. He wants to win the championship and the European championship and everything else. It will not affect his performance.

“The facts and figures prove if he is on the field for Real Madrid they have a better chance of winning.

“No-one has ever accused him of not giving 100% and a 100% Gareth Bale is one of the best players in the world. The coach should be happy and honoured he is on the pitch for him.

“There’s no guarantee he is leaving. If the right opportunity came along for him and it’s something he wants to do we have to have a chat with the president of Real Madrid and see where we are.”

Bale was pictured celebrating last month with a flag that said ‘Wales, golf, Madrid – in that order’ following Wales’ qualification for Euro 2020.

The quote is a reference to how Bale’s commitment to the club was described in an interview by former Real player Pedrag Mijatovic, someone who Barnett says ‘does not know Bale’.

The Spanish newspapers had already criticised the forward after he failed to play for his club for a month because of injury, in between making international appearances for Wales – with one paper calling it the “Miracle in Wales”.

“It [the flag] was directed only to the media because they had been writing very infantile and stupid stories from people that do not know him,” added Barnett.

“The truth is he has done fantastically for Real Madrid in the years he has been there and helped them win so much.

“It’s hard to imagine why the crowd react the way they do to him and listen to people that say things in the press. People say it would be better if he speaks the language but he speaks fluent Spanish and people write things that are complete rubbish.

“Gareth does not really like speaking to the the press and that’s his prerogative.

“He is not an entertainer as such, he’s a footballer, he speaks on the field and his results have been amazing. People should realise that and start applauding him for what he is achieving.”

Bale ‘still one of the best footballers on Earth’

Bale was booed when he came on as a substitute in Real’s 3-1 win over Real Sociedad on 23 November but received a better reaction three days later for the Champions League game against Paris St-Germain.

Former Middlesbrough boss Aitor Karanka, who played for Real and was their assistant manager between 2010 and 2013, said: “I was there that day [for the Sociedad match] and it was unbelievable.

“The Bernabeu is so demanding and they boo when you do not play well but it was almost the whole stadium [booing]. But the following game against PSG it was forgotten.

“But I didn’t hear anything bad from his team-mates and for me that’s vital. No-one in the changing room is criticising him – it’s the opposite – and everyone wants Bale, everybody likes him and everybody knows how important he is for the team.”

Barnett added that the Real players and staff would only have a problem with Bale if he did not perform in matches.

“Gareth is the same as Mr Zidane – he only cares about what he does on the pitch,” added Barnett. “He will give 100% and what has gone on before will stay private and he will keep it that way.

“[The stories about golf] are ridiculous. It’s his hobby, he trains with Real Madrid as hard as anybody, is never late for training, always on time and still one of the best footballers on Earth.

“So he plays golf – and is very good – but it’s ridiculous. It [the coverage] is a joke and the more the press write about it the funnier the joke becomes with the players.”