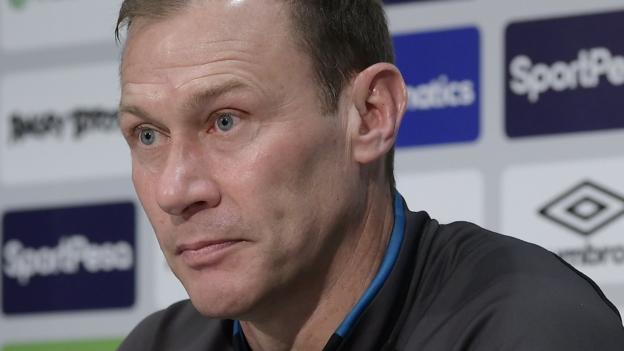 Everton caretaker manager Duncan Ferguson says it is not “realistic” to expect him to take the role on a permanent basis.

The 47-year-old, who made 239 league appearances for Everton in his playing career, scoring 60 goals, is filling in following Marco Silva’s sacking.

“I think the club will find a really top manager to come,” he said.

“It is a dream of mine to be the Everton manager, but let’s be realistic.”

The Scot, who has not managed a senior side before, added that he was not looking beyond the home match against Chelsea at lunchtime on Saturday.

“That is all my remit is, to get a result tomorrow [Saturday],” said Ferguson.

“This is a fantastic club. Who wouldn’t want to be Everton manager? I’m sure there will be many, many top managers up for this job.

“We have plenty of time in the league, plenty of games ahead of us. There are not many points to mid-table so if we can string a few results together I am sure we can start climbing the table.”

Manchester City assistant Mikel Arteta has been linked with the permanent role and has been endorsed by City boss Pep Guardiola.

“He is ready [to be a manager],” said Guardiola.

“It’s right when he has an offer and he accepts the offer. But if you ask whether he is ready in his knowledge of the game, as a person, as a professional; then he is ready.”

David Moyes, who managed the Toffees between 2002 and 2013, and Shanghai SIPG boss Vitor Pereira have also been heavily linked with the role, along with Napoli’s Carlo Ancelotti and Bournemouth’s Eddie Howe.

Silva thanks Everton staff and fans

Portuguese Silva, who has also managed Hull City and Watford in the Premier League, said that it was a “real honour” to lead Everton.

“Thank you to all of the Evertonian fans who always live and breathe the club and show such great passion,” he added in a statement.

“A special thank you to all of the players, for their professionalism and the commitment they put into their work every day and to the club staff who welcomed me to [training ground] Finch Farm.”

The trio are moving from their roles with the club’s under-23 side. Like Ferguson, both Ebbrell and Jeffers played for Everton, while Kelly represented Preston, Sheffield United and Republic of Ireland.