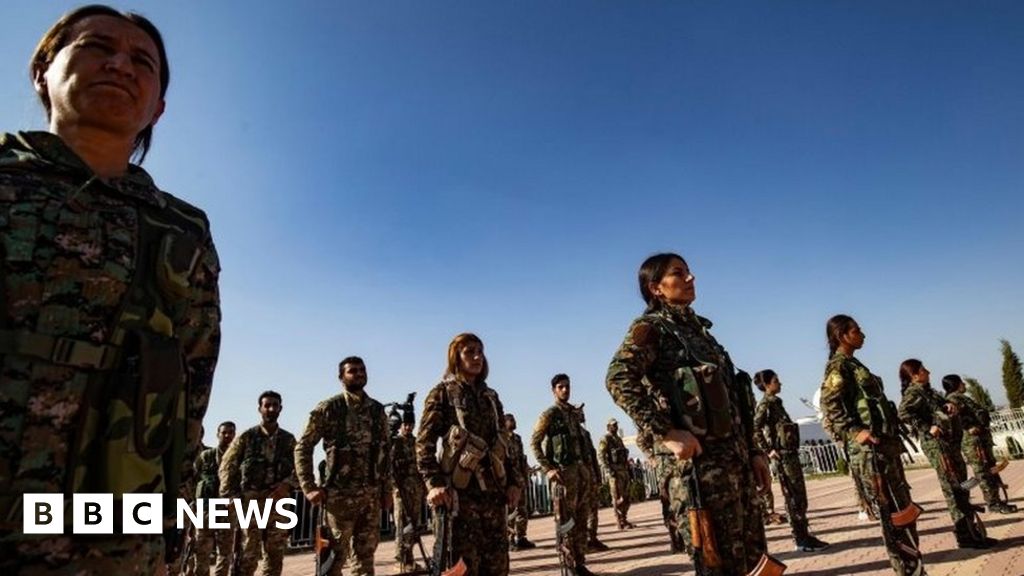 The Kurds in Syria say the Syrian government has agreed to send its army to the northern border to try to halt Turkey’s offensive against them.

Syrian state media earlier reported that government forces had been deployed to the north.

It follows the US decision to pull all its remaining troops from the area over the “untenable” situation there.

The Turkish assault, launched last week, is aimed at forcing Kurdish forces from along the border area.

Areas under control of the Kurdish-led Syrian Democratic Forces (SDF), the main US ally in the area, have come under heavy bombardment over the weekend, with Turkey making gains in two key border towns.

Dozens of civilians and fighters have been killed on both sides.

In a separate development on Sunday, Kurdish officials said nearly 800 relatives of foreign Islamic State (IS) members had escaped from Ain Issa, a camp in the north, as clashes raged nearby.

The Turkish offensive and US withdrawal has drawn an international outcry, as the SDF were the main Western allies in the battle against IS in Syria.

But Turkey views the Kurdish groups within the force as terrorists and says it wants to drive them away from a “safe zone” reaching 30km into Syria.

It also plans to resettle more than three million Syrian refugees currently in Turkey within the zone. Many of them are not Kurds. Critics have warned this could lead to ethnic cleansing of the local Kurdish population.

What do we know about the deal?

The Kurdish-led administration in northern Syria said the Syrian army would deploy along the entire length of the border as part of the agreement.

This deployment would assist the SDF in countering “this aggression and liberating the areas that the Turkish army and mercenaries had entered”, it said in a statement.

The move also “paves the way to liberate the rest of the Syrian cities occupied by the Turkish army such as Afrin”, it added.

Turkish forces and pro-Turkey Syrian rebels forced Kurdish fighters from Afrin back in 2018 after a two-month operation.

The deal represents a significant shift in alliances for the Kurds, after losing the military protection of their long-term US partners in the area.

It is not yet known what the Syrian government has committed to.

However SDF chief Mazloum Abdi acknowledged “there would be painful compromises” with the Assad government and its Russian allies, in a piece for Foreign Policy magazine.

“We do not trust their promises. To be honest, it is hard to know whom to trust,” he writes.

“But if we have to choose between compromises and the genocide of our people, we will surely choose life for our people.”

The deal follows US President Donald Trump’s surprise move last week to pull dozens of troops from pockets in the north-east, effectively paving the way for the Turkish operation against the Kurdish fighters.

At the time, the SDF called the move “a stab in the back”.

What about the latest US withdrawal?

US Defence Secretary Mark Esper earlier announced the Pentagon was moving up to 1,000 troops away from the north after learning that Turkey was pushing further into Syria than previously expected.

Describing the situation there as “untenable”, he said the SDF had been “looking to cut a deal” with the Syrian government and Russia to counter the Turkish attack.

This, he continued, would leave the US forces stuck between “two opposing advancing armies”.

Hours after Mr Esper’s comments, Syria said it was deploying its forces to the north to “confront a Turkish aggression”. It is not yet clear where exactly the troops are being sent.

On Sunday, President Trump tweeted that it was “very smart” not to be involved in the fighting “for a change”, saying engagement in Middle East conflict was a mistake.

What has Turkey seized so far ?

He told reporters the key border town of Ras al-Ain had come under Turkish control – though the SDF said they had pushed Turkish forces back to the town’s outskirts.

The UK-based monitoring group the Syrian Observatory for Human Rights (SOHR) said Turkey was in almost complete control there.

Both Ras al-Ain and Tal Abyad are key goals in the Turkish offensive against the Kurdish-led SDF forces.

Turkey also announced that its Syrian allies on the ground had seized a key motorway – called M4 – some 30-35km south of the border.

What are the casualty figures?

They’re rising, with civilians killed on both sides of the border:

The fighting has spilled over to areas close to IS detainee camps.

Fears that Kurdish forces will be unable to keep IS prisoners confined appeared to have been realised when officials at the Ain Issa camp said nearly 800 relatives of foreign IS members had escaped.

The SOHR said the number of people who fled was 100. It not known where they have fled to.

The camp holds about 12,000 displaced people, previously including nearly 1,000 foreign women and children with jihadist links.

The SDF says it is currently holding more than 12,000 suspected IS members in seven prisons, and at least 4,000 of them are foreign nationals.

IS has claimed recent car bombings and on Saturday declared a new campaign in Syria.

Turkey says it will take responsibility for IS prisoners it finds during its offensive.