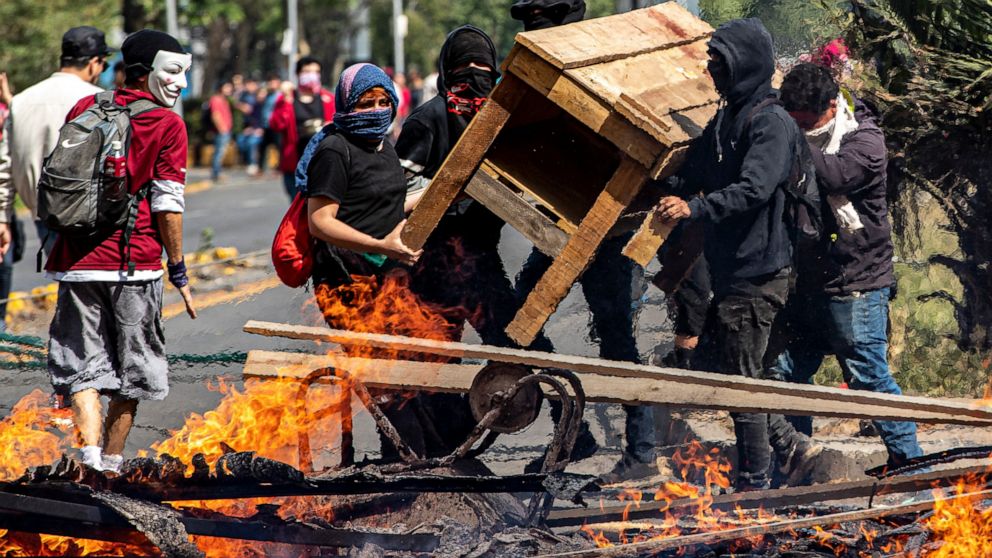 Chilean President Sebastián Piñera on Saturday announced the repeal of a subway fare hike that had prompted violent student protests, less than a day after he declared a state of emergency amid rioting and commuter chaos in the capital.

Soldiers patrolled the streets in Santiago for the first time since the military dictatorship of Gen. Augusto Pinochet ended in 1990, summoned to keep order following protests over a rise in subway fares from the equivalent $1.12 to $1.16. Subway service had been suspended in the capital since late Friday.

“I have heard with humility the voice of my compatriots,” Piñera said before announcing that “we are going to suspend” the fare hike.

It was unclear if the rollback would end the demonstrations and rioting.

The protest by students began on Monday when hundreds of young people mobbed several metro stations in Santiago, jumping over or dipping under turnstiles in a fare-dodging protest against the 4% increase in fares.

Chile doesn’t produce its own oil and must import its fuel, leading to high prices for gasoline, electricity and elevated public transportation costs. The government said the fare increase was necessary because of rising energy costs, the devaluation of the country’s currency and maintenance. But many Chileans are frustrated by rising prices.

By the end of the week the protests had turned violent with thousands of students burning subway stations and damaging dozens of others, and some set fire to a high-rise energy company building. Officials reported 156 police officers and 11 civilians injured and more than 300 people arrested.

Authorities said that in all, 78 stations along with infrastructure and equipment had been damaged in a system that has long been a point of pride for Chileans.

The conservative Piñera vowed that those responsible for the violence “are going to pay for their deeds.”

Near midnight, Chile’s conservative president declared a state of emergency in affected areas, allowing authorities to restrict rights to assembly and movement. Soldiers were deployed in the streets.

Despite the presence of soldiers and police, thousands of Chileans continued protesting including in cities outside Santiago, not only against public transit fare hikes, but the price of electricity, water and medicines.

Police repressed protesters with tear gas, while protesters had set up barricades and looted businesses.

Despite Pinera’s lifting of the fare hike, subway and public transportation services remained suspended late Saturday, and the state of emergency was still in place. Authorities imposed a 10 p.m. to 7 a.m. local time curfew for Santiago.

At the San José de La Estrella metro station, mechanical engineer Hugo Millacoy González, accompanied by his young son, said he was protesting the hike “so my son sees that they can’t mock the people.”

But others expressed fury at the commuter chaos and not being able to return to their homes.

If subway service is still suspended Monday, when many Santiago residents return to work and school, it would create further commuter chaos. Authorities have not said when service will return to normal.

Until Saturday, Chilean governments of left and right have been wary of bringing soldiers back into the streets since the end of a dictatorship during which thousands of suspected leftists were killed and dissent was ruthlessly crushed.

“Piñera’s decision to deploy the military in Chile — a country that experienced a 17-year repressive dictatorship — is troubling and could further destabilize the situation,” said Jenny Pribble, associate professor of political science at the University of Richmond. “It also sends a message to Chileans that the parties of the right still see the military, and not democratic process, debate, and dialogue, as the ultimate solution to social conflict.”