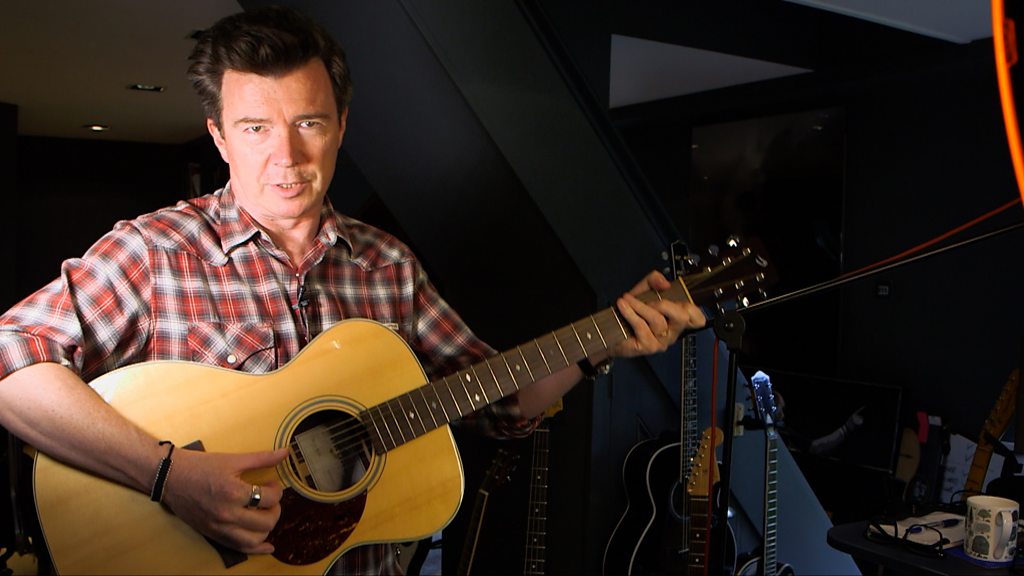 “We’ve tidied up a bit,” says Rick Astley, welcoming us into his recording studio. “Well, my wife has… I don’t really like it.

“I don’t trust anyone who has a tidy studio, do you know what I mean? Sometimes you go in and you feel like you’re messing the place up just by being there.”

This is definitively not the case in Astley Towers™, a generously proportioned family home in the leafy suburbs of Surrey.

The singer immediately makes us feel at home, throwing open the front door as we pull up on the driveway and welcoming us inside.

Barefoot and be-quiffed, he beckons us into the kitchen for a freshly-brewed cuppa, demonstrating skills that must have made him invaluable Stock Aitken and Waterman’s tea boy back in the 80s. We are even presented with a choice of mugs to complement the various blends on offer.

Caffeine administered, Astley shows into the studio, which leads immediately off the kitchen at the back of his house (the vocal booth even doubles up as a wine cellar).

It’s as cosy and familiar as any parent’s home office, centred around a computer balanced on an Ikea workstation, the assembly instructions still tucked under the keyboard, and his spare glasses resting next to the monitor.

Except this home office also happens to have a baby grand piano and a dismantled drum kit shoved in the corner. Oh, and it’s here that Astley wrote, sang and recorded his comeback album, 50: A soulful, revealing collection of pop songs that put him back at the top of the charts, 23 years after he quit the music industry.

“I honestly didn’t envisage it that way,” he says. “When I made 50 I was doing it for me. I thought I’d release it in a very home-grown way, like where you just put it on the internet somehow.

“I wasn’t necessarily anticipating going to a record label and trying to get it on the radio. I didn’t think that was possible, if I’m honest. I’d given up that a long time ago.”

50 went on to sell more than 300,000 copies, knocking music icon Paul Simon off number one, and easing Astley out of retirement. Not bad for someone who’d spent the preceding decade as the source of an internet prank – “rickrolling” – where users would be tricked into clicking a link for his 1987 pop smash Never Gonna Give You Up.

Like his dancing in the video, the song was awkward and gauche, but it charted all around the world.

Within seven months of its release, Astley was a millionaire, but you always got the sense the material was under-selling his voice.

“I’m not so sure Stock, Aitken and Waterman were focused on finding people who were going to be legendary vocalists,” he says, semi-diplomatically.

“As the singer, you came in, you sang the song, you went. And I was okay with that – they were creating their sound, and we were going to be put into that.”

“Pop music is very different now,” he adds. “If you look at Billie Eilish, she’s as much a part of her records as anybody, and I think that was harder in the 80s. You were a bit more a product of the machinery.”

Despite what you might think, he’s not ashamed of those songs. Hits like Together Forever and Whenever You Need Somebody are “ingrained in my DNA,” says Astley, and he’s never gonna give up playing them live.

“I’m probably hyper aware of not betraying the audience,” he admits. “The people that come to my gigs, as a whole, have got families and lives and all the rest of it, and they’re giving up something to come out for the night. You just can’t take that for granted.”

Not a ‘true artist’

So he won’t be doing a Bob Dylan and reworking Cry For Help into a croaky folk dirge?

“Well, artists have every right to do whatever they want to do, and he’s the epitome of that,” says the singer.

“But I’ve heard so many people who are massive fans of Bob Dylan, who’ve gone to a gig and don’t even know what songs he’s doing ’til half way through verse two.

“I always feel obliged to please my audience, if I’m honest. Maybe that means I’m not a ‘true artist’, and I’m all right with that.”

It’s a typically modest response. Astley is cautious of ego and hyperbole and showbiz shenanigans, although he recently told Q Magazine “there were a few curtains pulled down and a few oranges thrown at wall,” at the height of his fame.

As he shows us round the studio, he’s humble about his musical abilities (“I make simple records”) and says he still finds it “weird to meet people you admire”.

And while his house is full of expensive artwork and extravagantly feathered light shades, the only award he’s ever put on display was for the Lion King soundtrack – on which he was persuaded to sing backing vocals after being discovered “hanging out” at the studio with a friend.

“That’s pretty much the only platinum record I’ve ever had on the wall,” he says. “It was in our daughter’s bedroom because, obviously, she was a massive fan of that movie… as we all were.”

Still, you can’t hide your light under a bushel forever, so the singer is celebrating his resurgence with a Greatest Hits album that, for the first time, combines both phases of his career. Even so, he’s not going to do the hard sell.

“If I’m being brutally honest, doing a ‘Best Of’ in this day and age is a bit weird, because every piece of music that’s ever been recorded is already out there somewhere on a playlist,” he says.

To make the package more attractive, he’s added a new song, Every One Of Us, alongside a second disc that presents pared back, acoustic versions of his biggest hits.

“I was very aware of not wanting to take the sparkle out of them, because they’re very sparkly records,” he says.

So the melodies remained intact, even when the arrangements became “lower and darker”, as on the pianoforte rework of Never Gonna Give You Up.

“I think it would be a rock record, if I’m honest,” says the singer – who regularly covers AC/DC’s Highway To Hell in his live show; and who’s become an occasional guest vocalist at Foo Fighters’ gigs.

So could he ever envisage a full collaboration with Dave Grohl and company?

“They’re a pretty amazing, ferocious live band and I think anybody in the world would want to make a record with them,” he laughs.

“But I think it’s nice that we get together sometimes and it’s like ‘Boom!’ and then it just drifts off…

“It’s been lots of fun, but I don’t want to ever get into a situation where I take that for granted, do you know what I mean?”

Instead, he’s content just to pootle around at the back of his house, making simple, heartfelt records that just so happen to sell in the hundreds of thousands.

“I guess I feel really comfortable here, in my own little way,” he says, gesturing around the room.

“I’ve got all my toys here and the things I understand. And if I turn the lights down low enough, and I’ve got enough time, I can make a record.”

Rick Astley’s hits collection, The Best Of Me, is out this Friday.