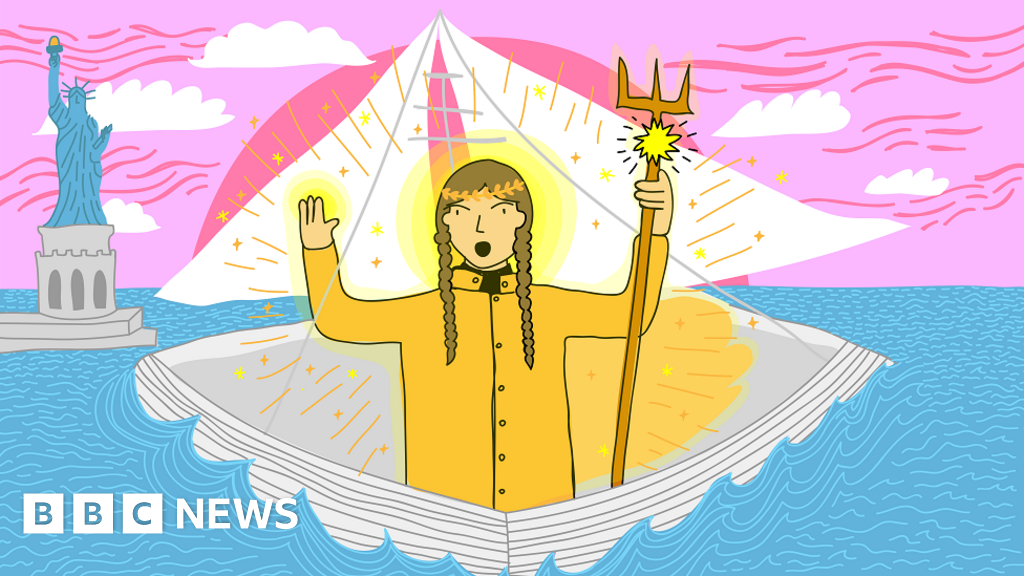 It may appear that the trolling of women is an unpleasant by-product of the internet era.

In fact, the tactics used are remarkably similar to those employed in ancient times, especially if you compare the trolling of Greta Thunberg and the way the ancient Greeks used to treat “hysterical” women.

Girls and women who speak out or express opinions are often subjected to abuse online, intended to intimidate and silence them.

Climate activist Greta Thunberg is a prime example of this. As the teenager continues to speak out about the impending environmental problems caused by climate change, she is subject to greater and greater amounts of abuse.

She has repeatedly been called “hysterical”, and “mentally ill”, and has been the target of social media death threats.

While these online platforms are relatively new, the threats themselves are not.

For those of us working in Ancient Studies, it is easy to spot a pattern here stretching back across millennia.

As far back as 2,500 years ago, in ancient Greece, girls and women were controlled in similar ways.

Greta has become, for many, an icon of resistance, of speaking truth to power. In this, she resembles the mythical Greek heroine Antigone.

Antigone is only in her mid-teens when she rebels against her uncle Creon, the increasingly tyrannical King of Thebes.

Like Greta, she risks her safety for a cause that she believes in, and refuses to be cowed by powerful politicians or by what anyone else thinks.

And like Greta, Antigone’s strength is undermined by misogynist beliefs, as Creon claims that she is insane.

This part of the myth represents a common view at the time, one which still receives airtime today.

An ancient Greek medical text tells us girls like Antigone, who were old enough to be married but had not done so, were mentally ill. They were thought to be “hysterical”, an idea that originates from ancient Greece.

These young women were also thought to be too gloomy, obsessing about death.

One might imagine an ancient Greek sarcastically commenting that Antigone “seemed like a very happy girl looking forward to a bright and wonderful future”.

Misogyny in the social media age

Fast forward 2,000 years, and while misogyny may be culturally hardwired, the relatively recent creation of social media has facilitated it in particularly damaging ways.

These platforms have allowed anonymous attacks and enabled campaigns targeted against individual women.

Women in the public sphere can now expect to be bombarded with memes and threats on social media by a brigade of online trolls.

This sometimes involves having personal information such as their addresses and phone numbers published; a tactic known as “doxxing”.

Over time, these trolls have only become more experienced and sophisticated in their use of social media to threaten women who speak, and frighten others into silence. These attacks are sometimes inflamed by racism, anti-Semitism, and transphobia.

So what’s the solution? One approach is to refuse to turn a blind eye to attackers, and engage with them instead.

This is the approach taken by classics professor Mary Beard, who was affectionately called “the troll slayer” by The New Yorker magazine.

In one notorious incident, when a 20-year-old university student tweeted graphic sexual slurs at Prof Beard, one of her supporters recognised him and offered to inform his mother about his behaviour.

When asked by the BBC what she would say to him, she replied: “I’d take him out for a drink and smack his bottom.”

But even if we could identify all online abusers, Prof Beard’s approach does not necessarily seem practical or desirable: think of the time, money, and energy it would take.

Other tactics involve unifying against trolls, or cutting them off altogether.

The phrase refers to the practice of musk oxen who form a circle around vulnerable members of the herd to protect them.

Social media platforms themselves have also attempted to tackle the problem by implementing stricter harassment policies and restricting the accounts of influential trolls.

This often leads to complaints that freedom of speech is being limited.

These objections go to the core values of modern society: how can we preserve the freedom of speech while creating an internet where future Gretas won’t be subjected to so much abuse?

Besides, de-platforming alone may not be enough to combat the misogyny ingrained at every level of our society.

The ancient Greeks might be helpful here. They too prized freedom of speech. They had the word parrhesia, which is not quite the same concept as ours, but includes the key idea that anyone can speak frankly.

However, it was intended to be practised alongside with another core value – aidos.

Aidos essentially means seeing yourself as a social being who is connected to your fellow human beings.

It means having respect towards others. So freedom of speech, for the ancient Greeks, would have encouraged robust political debate, but combined with a sense of respect. This would have meant that anonymously attacking women or sending them pornographic slurs would not have been socially acceptable.

Imagine a future where children are brought up with a sense of aidos, of greater connectivity and awareness of their social responsibilities. Social media can help here; it doesn’t have to be only a tool of toxic masculinity.

The Greeks have another lesson for us too. It is that there’s always an alternative ending to the story.

The Antigone myth that most people know ended in tragedy for Antigone, and for Creon.

But there was another version of the myth in which Antigone survived, married, and had a child. The child, of course, symbolises the future. A different outcome is always possible. We just have to change the script.

This analysis piece was commissioned by the BBC from experts working for an outside organisation.

Donna Zuckerberg is editor-in-chief of online classics journal Eidolon, and the author of Not All Dead White Men: Classics and Misogyny in the Digital Age. Her brother is Facebook founder Mark Zuckerberg.

Helen Morales is professor of Hellenic Studies at the University of California, and author of the upcoming Antigone Rising: The Subversive Power of the Ancient Myths.

BBC 100 Women names 100 influential and inspirational women around the world every year and shares their stories.