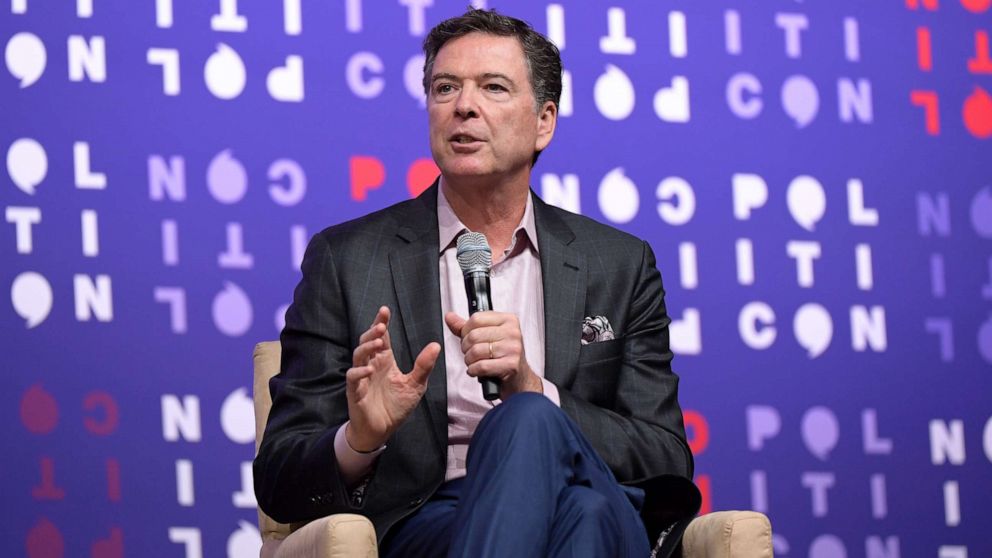 Amid brewing tensions in Washington among congressional Democrats and the White House, former FBI Director James Comey said that the House of Representatives “has no choice” but to move forward with an impeachment inquiry into Donald Trump after the president’s overtures to his Ukrainian counterpart to investigate Joe Biden and his son, Hunter.

“The House has no choice but to pursue an impeachment inquiry. All I know about the facts are coming from news accounts,” Comey said during a wide-ranging interview at Politicon, an annual, non-partisan political convention that aims to bring “Republicans, Democrats and people of all political stripes” together.

Trump’s call with Ukraine’s president “might be” enough to impeach the president, Comey added, before urging, “It’s certainly powerful grounds to investigate.”

As he unleashed a blistering rebuke of Trump’s alleged conduct, Comey added, “If the news accounts are accurate, the president engaged in a shocking abuse of power.”

Comey also said if he still ran the FBI he “might” open a criminal investigation into whether or not Trump engaged in bribery or quid pro quo dealings during his phone call with the Ukrainian president.

But Comey warned that he seeks to ultimately “withhold judgment” on whether Trump should be impeached until “we have a chance as a country to see and public testimony to get the transparency we deserve.”

In 1974, President Richard M. Nixon announced he’d be resigning from office in the wake of the Watergate scandal.

Last month, House Speaker Nancy Pelosi announced that she, without a vote, was launching “a formal impeachment inquiry” after months of resisting pressure from some fellow Democrats following the completion of former special counsel Robert Mueller’s investigation into Russian interference in the 2016 election.

At the crux of the Democrats’ impeachment inquiry is whether the president withheld aid from Ukraine to pressure the country to investigate his political rival’s family and a conspiracy theory related to the 2016 presidential election.

Comey conceded that Mueller’s nearly two-year investigation, which culminated in a redacted summary report released by the Justice Department, “laid out an extraordinary series of acts by the president that would have resulted in anyone in this room already being in jail for obstruction of justice.”

Since the close of Mueller’s probe, Comey said his own thinking on impeachment have evolved, asserting, “I was against the idea of impeachment when it was just about Mueller material.”

“My view now is I don’t know how, as a member of Congress, you can look yourself in the mirror and say, ‘I’m abiding the oath I swore to this Constitution of the United States,'” he added.

Comey also criticized Attorney General William Barr for the Justice Department shifting a review into the origins of the investigation into Russia’s interference in the 2016 election into a criminal investigation, in which U.S. Attorney John Durham, who is running the investigation, can subpoena witnesses, impanel a grand jury and bring criminal charges.

“I can’t tell what’s going on with the attorney general and that investigation,” he said. “I was deeply concerned by some things he said early on. … I don’t know what they’re looking at. So I’m not really in a position to say you shouldn’t investigate.”

“I would hope that Mr. Durham will do everything possible to protect his reputation from being damaged by those in leadership, and the most important way you can do that is give us transparency,” Comey added. “Gather the facts, write a report and share it with the American people.”

Regardless of the outcome of an impeachment inquiry, Comey said he’s “optimistic” that “the American people are going to pass judgment on what kind of country we want to be.”

“Our leaders must reflect the glue that holds us together. They can’t be people who lie all the time,” he said. “And I want people to see that’s true, whether they’re Republicans or Democrats.”

But when asked if he would feel differently if Trump won reelection, Comey joked, “I will be, from my new home in New Zealand, I still would believe in America.”

Comey also was asked if he would ever run for political office.

“I’m never going to run for office,” he said. “I hope to be useful without running for office.”