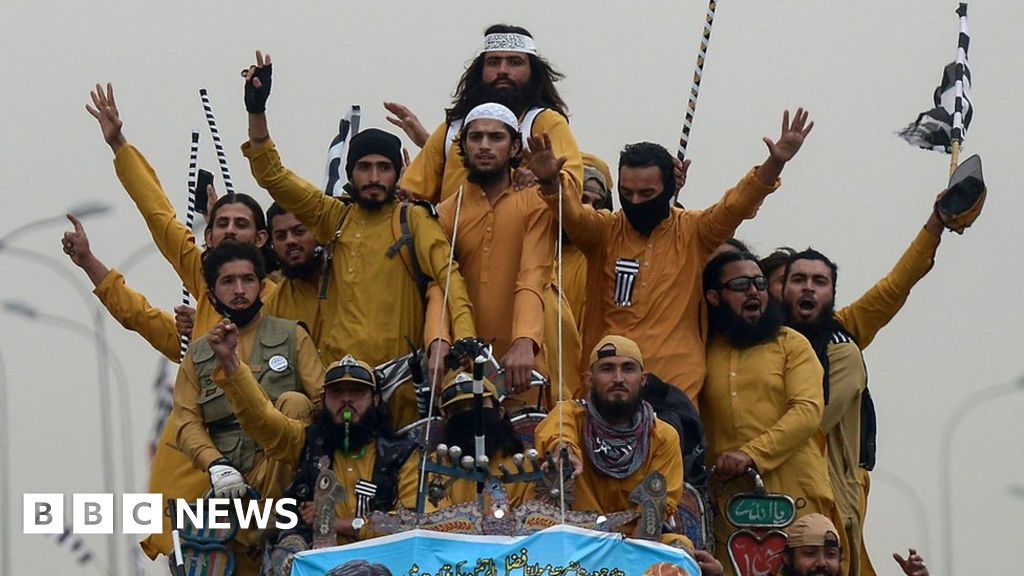 The convoy of bearded protesters, waving black and white flags and dressed in mustard yellow, descended on Pakistan’s capital Islamabad hoping to force Prime Minister Imran Khan from office less than 18 months into the job.

The vast majority were members of Jamiat Ulema-e Islam Fazal-ur-Rehman (JUI-F), one of Pakistan’s largest Islamist parties, travelling from all over the country to try to oust the cricketer-turned-politician.

But as eye-catching as they were, there was something else more noticeable: the lack of any women.

Their absence, however, was not a mistake: pamphlets released before the Azadi (freedom) march set off last Sunday told women to stay at home to “fast and pray”.

It worked. BBC Urdu reporters say not a single woman was part of the JUI-F convoy as it wound its way around Pakistan over the course of the next five days.

Then, as it reached the capital for a mass rally alongside other opposition parties on Friday, another command was rumoured to have been sent out: female reporters were reportedly banned from covering the event.

Some found themselves blocked from entering, while others said they were harassed to the point where they had no choice but to leave.

“A man came and started saying women aren’t allowed, women CANNOT be here. Leave! Slowly but in a minute’s time a crowd of men encircled us and started chanting the slogans, we had to leave,” tweeted journalist Shiffa Z Yousafzai..

JUI-F leader Maulana Fazlur Rehman was quick to say they had a “lot of respect for our women” and that female journalists could attend the rally in “full dress code”, APP news agency reported.

Meanwhile, Naeema Kishwar Khan, who represents JUI-F in the Provincial Assembly of Khyber Pakhtunkhwa, denied women had been formally banned and defended the lack of female representation.

“If you look in the army, there are men in the front, and women provide medical help behind,” she told BBC Urdu. “Our movement is like a war, the situation is deteriorating. If not, women would not be behind.”

According to BBC Urdu reporters, the women who did attend – some of whom were linked to the other opposition parties taking part – kept a low profile.

On social media, the outcry began to grow. But journalist Benazir Shah shrugged it off. “I see this is for the better,” she told BBC Urdu.

“The women of this country do not need to be part of a battle between two men and their egos, which is what this march is, a power play between two men.

“This march is not a movement for social change, as the one the world is witnessing in Lebanon, which has the equal participation of women and men. JUI-F aims to remove a democratically elected government and it uses whatever foul play it can to do so, such as religion.

“The women of this country should not be on the wrong side of history.”

What is the march actually about?

This is the first major challenge to Mr Khan, led by his long-term rival, Maulana Fazlur Rehman and backed by other prominent opposition parties. On Friday, they gave the PM 48 hours to step down.

Mr Khan has been hit by claims his election win in 2018 was unfair. An EU observer mission overseeing Pakistan’s election in 2018 found no evidence of vote rigging but a “lack of equality of opportunity” for each party in the run up to the election.

Marchers are also angry with Mr Khan over the state of the economy, which is putting a financial strain on the people he promised to help.

“They have not come to power on the public’s mandate but on someone else’s direction… they won’t work for the public, rather they will only please their selectors,” Mr Rehman told supporters.

However, some analysts have suggested Mr Rehman has different reasons for the march.

A canny political operator, he has played a role in government for years – until he lost his seat last year.

He is also no stranger to the headlines – publicly doubting the shooting of Nobel Prize winner Malala Yousafzai back in 2012, and then calling for a “people’s court” to retry Asia Bibi, the Christian woman wrongly sentenced to death for blasphemy, after she was freed from jail.

Columnist Arifa Noor told AFP: “He’s been left out of a game and he thinks he’s been cheated out of his rightful place.”

What does the lack of female participation suggest?

On the surface, it doesn’t look good. But the JUI-F is a very particular case.

“I wouldn’t say that because women have been asked to sit out a march by a right-wing party, it means that they have been excluded from politics altogether,” Ms Shah told the BBC.

“The JUI-F has never been a pro-women party. They have opposed the honour killing bill, the women protection act and more recently a bill against child marriages.

“We should be more worried about what the other three political parties are doing to include women and especially the ruling party. The federal cabinet has a paltry representation of women. In Punjab, there are only two women in the provincial cabinet.”