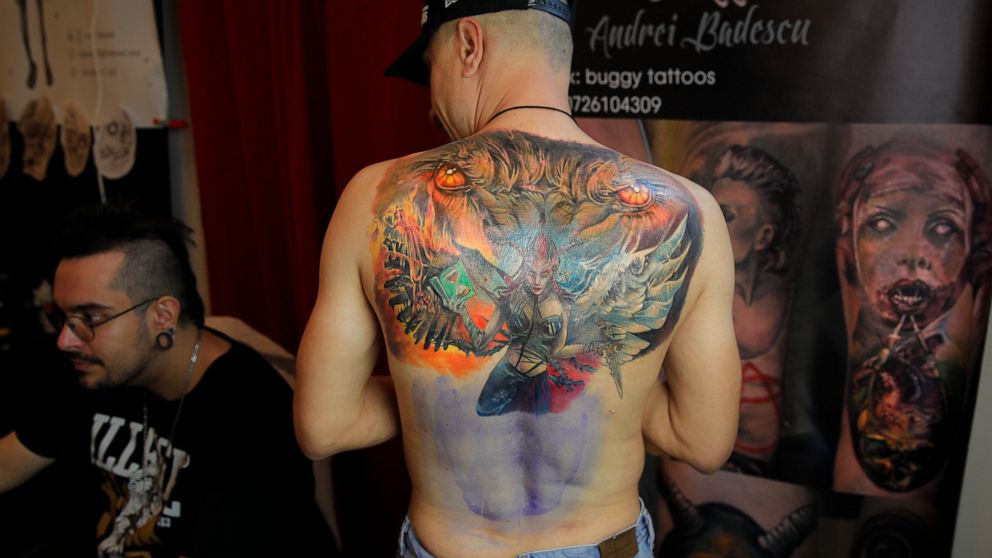 In the slightly incongruous settings of an ornate late 19th century palace, a man with hundreds of metal piercings hangs in the air by hooks dug into his skin, next to a bearded giant tattooed from tip to toe.

The display was part of the 10th International Tattoo Convention, which gathered more than 100 tattoo artists from around the world in the Romanian capital, Bucharest.

The three-day event was held at the end of last week in the Bragadiru Palace, a boisterous specimen of the ornate monumental architecture from the turn of the 20th century that got Bucharest known as the “Paris of the East.” It was designed by Austrian architect Anton Shuckerl for a Romanian beer tycoon.

Visitors had the opportunity to get inked by artists such as Bob Tyrrell and Gabriel Ripley from the U.S. and China’s Zhu Shi, or to see at close quarters people famous for covering their bodies in tattoos — Venezuela’s Emilio Gonzales, Canada’s Doug Smode and Germany’s Guinness World Record holder Rolf Buchholz, known for his 453 metal piercings.

Artists from 26 countries competed in creating the best tattoo in several categories such as Best Black and Grey and Best Color.

Tattoos were virtually unknown until fairly recently in Romania, which was ruled by a repressive communist regime from 1947-1989.