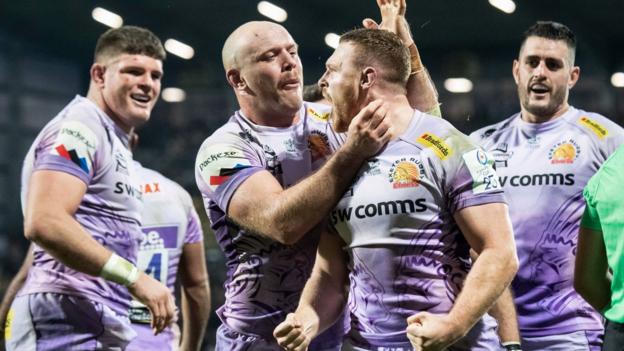 Exeter director of rugby Rob Baxter says his side can now “move on” with their season after their excellent 31-12 Champions Cup win in La Rochelle.

The Chiefs have had a stuttering start to start to the domestic season, losing twice and registering two narrow wins.

“We needed this game to come so we could move on with the rest of the season,” Baxter told BBC Radio Devon.

“I’ve just said to the lads ‘now it’s here, and now we’ve done it, can we now move on and just get on with things’.”

Exeter’s Champions Cup record has been poor in comparison to their domestic form.

Despite making the last four Premiership finals the Chiefs have progressed out of the pool stages in Europe just once in that time, in 2016, when Bordeaux surprisingly won at Clermont Auvergne on the final weekend to allow Exeter to top their pool as all four sides in the group finished with three wins.

Saturday’s bonus-point victory in France put Exeter a point clear at the top of Pool Two ahead of their home game with fellow opening-weekend winners Glasgow.

“There were plenty of guys on the field who had their best games of the season and that’s what it should be like,” added Baxter.

“I’ve said to the lads stop and savour today and remember it, and stop and think about what you created, and how you did it, because you’ve got to harness that again next week.”