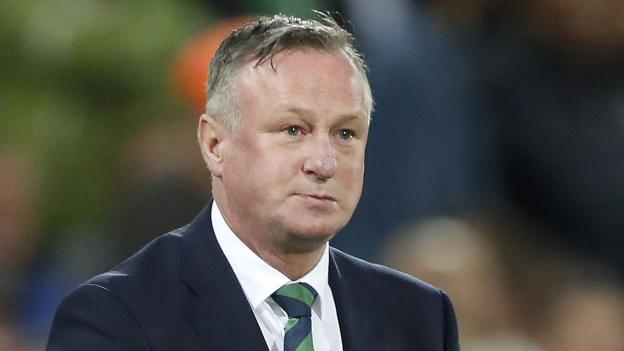 Michael O’Neill has described Ronald Koeman’s criticism of Northern Ireland as “irrelevant to me”.

The Dutch scored two injury-time goals as they came from behind to beat Northern Ireland 3-1 in Rotterdam.

“It’s irrelevant to me,” said O’Neill ahead of NI’s friendly with the Czech Republic on Monday.

“You give respect to the opponent and how they play. We didn’t go there to entertain Ronald Koeman, that wasn’t the purpose of what we did.”

He added: “If you’re picking players from Barcelona, Juventus and Liverpool you can play a certain way. If we were so terrible, why were we so difficult to beat? And clearly we were extremely difficult to beat.

“It’s disappointing that a manager of that class feels the need to say that. It’s not something we need to dwell on.”

The Netherlands beat Belarus 2-1 on Sunday evening, while Germany defeated Estonia 3-0 in the other Group C game.

O’Neill believes Monday’s friendly against the Czechs, who beat England in their qualifying group on Friday, could be good practice for a potential Euro 2020 play-off.

NI’s chances of qualifying for the finals through the group were significantly reduced by Thursday’s last-gasp defeat by the Netherlands.

However, finishing third in the group would give O’Neill’s men a strong chance of securing a play-off spot.

“This is a good game for the players against a good opponent,” he said.

“If we don’t get automatic qualification for the Euros then we would hope to have the opportunity of a play-off.

“And if we are in that play-off situation then we are going to have to come to places like Prague and beat teams like the Czech Republic.

“That is what we need to put into the minds of the players, that these are games that we need to find a way to win, especially when the stakes are high as they would be in a play-off.”

‘Qualification is not done and dusted yet’

While O’Neill admits that the play-offs could offer Northern Ireland their best chance of reaching next summer’s Euros, he has insisted that they can still qualify automatically from the group.

To do that, they are likely to need to beat the Dutch in Belfast and win away in Germany next month, but O’Neill remains optimistic they can do that.

“We’re not saying it’s done and dusted. Our intention is to try and beat Holland in Belfast, we believe we can do that and that’s where our real focus is,” O’Neill continued.

“If we can do that, then we have a massive game to look forward to away to Germany. Northern Ireland have gone and won there in the past, and we have to believe we can do that.”

If Northern Ireland don’t qualify automatically and end up in the play-offs, then O’Neill believes strongly that they will be fully deserving of their place.

“Given the group we are in and the nature of how we ended up in it, I certainly think we would deserve that chance to qualify. It looks positive for us at the minute, but you don’t want to get your hopes up too high too soon.”