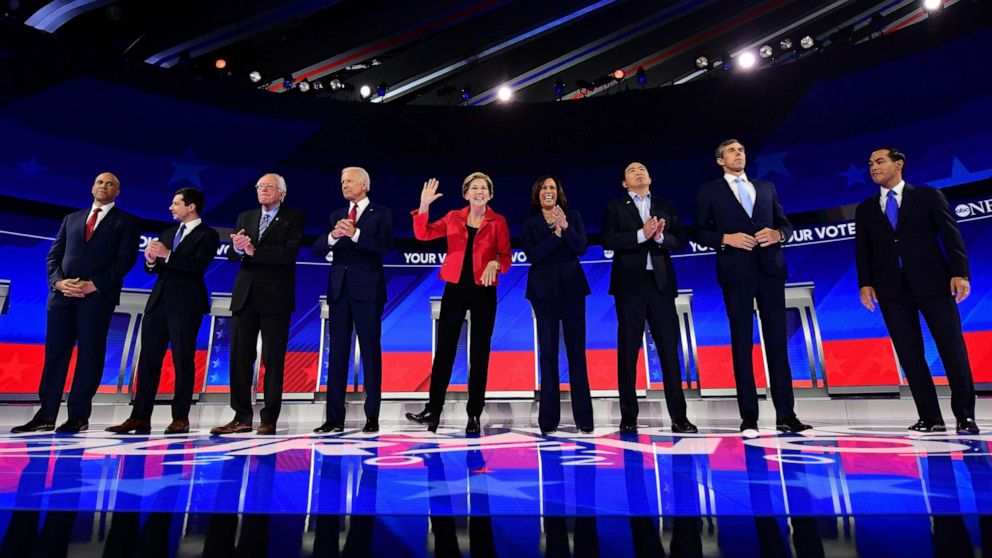 The Democratic presidential contenders head to Westerville, Ohio on Tuesday for the fourth primary matchup of the season as an ongoing impeachment inquiry battle continues to pull the contest into Washington’s orbit despite efforts to keep kitchen table issues at the forefront on the trail.

The pivotal debate, which will be hosted by CNN and the New York Times on the campus of Otterbein University, comes as the Democratic field is readying to spar over health care, immigration, climate change, criminal justice reform, among other topics, but is being consumed by external forces.

Here is how the night is unfolding.

The debate features a dozen candidates packed on the stage, the largest roster yet to appear in a single primary debate ever.

While the same 10 candidates who participated in the third presidential debate a month ago in Houston, hosted by ABC News and Univision, will appear on stage, both Hawaii Rep. Tulsi Gabbard, who reclaimed a podium after missing the cut last month, and Tom Steyer, a billionaire activist who entered the race in July and will be a newcomer to the stage this time around, will join their Democratic rivals.

The 12 candidates who officially qualified for the debate, in podium order as announced by CNN, include:

The debate is slated to air at 8 p.m. ET on Oct. 15. The moderators will be CNN anchors Anderson Cooper and Erin Burnett, and New York Times national editor Marc Lacey.

2:13 p.m.: FiveThirtyEight and Ipsos try to answer “Who Will Win The Fourth Democratic Debate?”

If something is going to shake up the race before the Iowa caucuses, it’s likely to be a debate. So ABC News partner FiveThirtyEight teamed up with Ipsos to once again track how Tuesday’s debate, hosted by CNN and The New York Times, affected likely primary voters’ feelings about the candidates. The FiveThirtyEight/Ipsos poll, conducted using Ipsos’ KnowledgePanel, will interview the same group of voters twice, on either side of the debate, to capture both the “before” and “after” picture.

1:47 p.m.: Ahead of the debate, Buttigieg comes out swinging

12:09 p.m.: Here’s how the candidates are faring on raising money

Candidates have been sending out dire pleas heading into the final days, pushing out a cascade of fundraising emails and running ad blitzes on social media.
Despite recent polling that showed his campaign trailing behind some of his 2020 Democratic rivals, the Vermont senator set the tone for third-quarter fundraising Tuesday morning, announcing a whopping $25.3 million haul. The number eclipses Sen. Elizabeth Warren’s combined total raised in the first two quarters and leaves Sanders with over $61.5 million in receipts this year. Read more here.

5 a.m.: Here’s what to watch for in tonight’s debate

For the second consecutive matchup, Former Vice President Joe Biden will stand shoulder-to-shoulder with Massachusetts Sen. Elizabeth Warren, pitting the elder statesman up against the rising liberal stalwart, who is steadily climbing in recent national polling and now shares the top spot with the former vice president.

Biden is walking into the debate hall on less steady ground: between fending off President Donald Trump’s unsubstantiated claims about the former vice president’s inappropriate behavior surrounding his son Hunter’s Ukrainian business dealings, lackluster fundraising numbers in the third quarter of 2019, and his lead in national polls slipping.

Many of the candidates vying for a spot on the 2020 ticket now have launched thinly veiled jabs against the veteran lawmaker — maintaining full-throated support, while in the same breath saying they themselves would never allow their cabinet members’ families to sit on a foreign board, as Hunter Biden did during the Obama administration.

Biden pressured the Ukrainian government to oust a prosecutor who ostensibly had been leading an investigation into Burisma, an oil company, and was unpopular in his home country due to a lack of action. However, no evidence has emerged to support Trump’s main allegation that Biden did so to benefit his son, Hunter, who was later added to the company’s board of directors. Several international leaders, including senior officials at International Monetary Fund, have criticized the prosecutor and said Biden’s recommendation was justified.

As House Democrats move full-steam ahead with an impeachment inquiry, this will be the first debate in which questions about the matter may be broached.

Meanwhile, Warren — who has sought to avoid clashing with her Democratic rivals before a national audience so far, instead focusing on her pitch for big, structural change — might become a key target for the lower-polling candidates who are struggling to make their mark on the electorate.

Flanking Biden on the other side will be Vermont Sen. Bernie Sanders, 78, who after suffering a heart attack, vowed to make it to the debate stage amid questions about his health and ability to keep up with the rigorous pace of the campaign trail.

Despite those concerns, he has already previewed the differences he seeks to make between him and his progressive colleague, Warren.

“There are differences between Elizabeth and myself,” Sanders said in an interview with ABC’s “This Week” on Sunday, two days before his first official emergence back on the campaign trail since his heart attack. “Elizabeth, I think, as you know, has said that she is a capitalist through her bones. I’m not.”

But beyond the three top-tier candidates, the others senators vying for the White House, including New Jersey Sen. Cory Booker, California Sen. Kamala Harris, and Minnesota Sen. Amy Klobuchar, are likely to take the stage with renewed urgency to turn a breakout moment into a tangible spike, as the crowded field enters the critical four months before first votes are cast in the Iowa caucuses in early February.

On Monday, Booker started to draw dividing lines with his opponents, criticizing the South Bend mayor for equating gun buybacks to a “confiscation” of firearms.

“Calling buyback programs ‘confiscation’ is doing the NRA’s work for them … they don’t need our help,” Booker tweeted.

During an interview with the Snapchat show “Good Luck America,” Buttigieg said, “I just don’t think we should wait to have a fight over confiscation when we can win on background checks and assault weapons ban and red flag laws right now.”

Despite avoiding conflicts with other candidates so far in the previous three debates, Buttigieg is coming to the stage with a more aggressive approach.

In the same Snapchat interview, he also hit back at O’Rourke, who has recently took aim at Buttigieg for being a “poll-driven” candidate, telling the platform, “This is a policy disagreement, and it’s about governing. I get it, he needs to pick a fight in order to stay relevant.”

But aggressively targeting another candidate has so far backfired for those who’ve tried, such as Castro, who leaned into his aggressive style at the third Democratic debate, when he questioned Biden’s memory. But even some of his competitors criticized his decision to make an apparent swipe at Biden’s age.

Regardless, the debate will provide another night of contrast that will further crystallize the differences among the Democratic field, that still counts 19, on policy, philosophy and governing – before November’s upcoming debate could shrink the stage under more stringent qualifying rules.