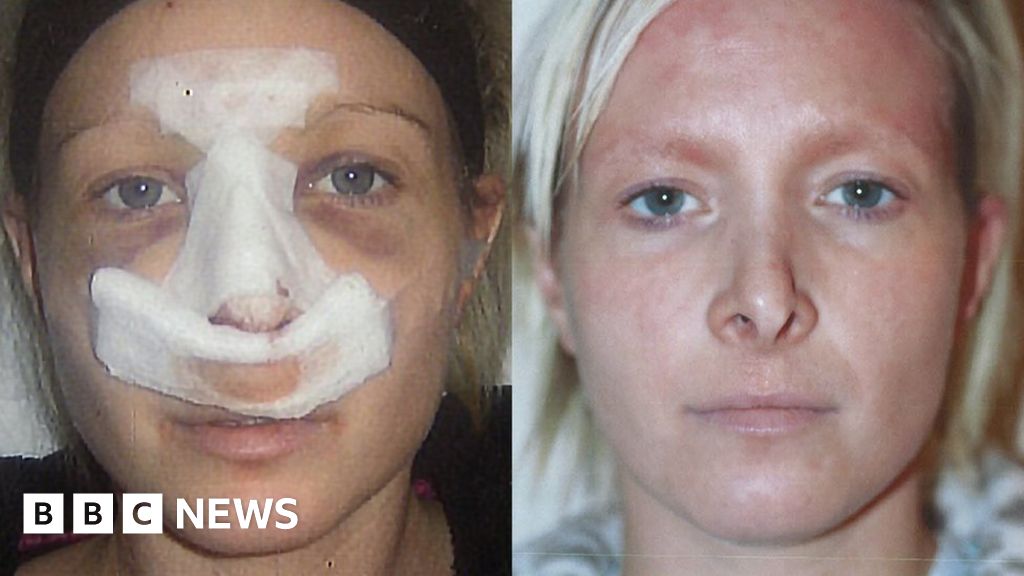 Cosmetic surgery is a booming industry in the UK, with 65,000 operations carried out last year. But BBC Disclosure has discovered some companies use surgeons from abroad who fly in and out of the country, leaving patients exposed if complications arise.

‘My nose had to be reconstructed from my ribs’

Catherine Roan went for an operation to reduce the size of her nose after being called Pinocchio by a stranger.

The original procedure and three further operations to correct it left her looking like someone who had been in a bad car crash, an expert later said.

The 41-year-old, from Thornton in Fife, had the op through Transform, one of the UK’s leading high street cosmetic surgery providers.

Transform’s Edinburgh clinic recommended Antonio Ottaviani, a surgeon who flew in from Italy to perform the rhinoplasty.

Over the next four years, the Italian doctor returned to Scotland to perform three revision procedures in an attempt to give Catherine the nose he had promised.

Each one brought disappointment and pain, she told Disclosure.

When the cast was removed after the fourth surgery, she found “an absolute mess” underneath.

“My nose was worse than ever,” she said. “There was a big skin tag, a skin fold hanging down one side, it was squint, there was something wrong with the tip.”

Mr Ottaviani was back in Italy for a month so nurses emailed him pictures. He promised to fix her nose but she had lost her confidence in him and insisted on a new surgeon.

Several doctors refused to help, saying they didn’t want to get involved, but eventually, five years after her first surgery, a surgeon in England agreed.

Transform paid for her surgery and expenses.

The surgeon who fixed her nose used part of her rib and liquid from her scalp.

Catherine says she gets a “funny feeling” in her rib and can’t sleep on her front but it is “a small price to pay” for having her nose corrected.

The surgeon ordered to pay £200,000 in compensation

An expert report into her care said the doctor failed to adequately explain the risks of the three revision surgeries.

Despite winning a medical negligence action in court, Catherine has only received 1% of the £100,000 she was awarded.

Mr Ottaviani did not show up to court but Catherine got an order to go after his assets in Italy. She has so far been unsuccessful.

The BBC knows of at least six other women who have complained about Mr Ottaviani’s practices.

He was also ordered by the courts to pay another patient £100,000. They have received nothing.

The surgeon told the BBC he did not want to be interviewed. He said he had always been available when Transform asked and that he had punctually respected his agreement with Catherine Roan.

Mr Ottaviani said he could not comment on specific cases because of patient confidentiality and that five or six unhappy patients out of 6,000 represented a very small percentage and was far below average.

Disclosure tracked Mr Ottaviani down and found he was flying still into the UK to work at a private clinic in London. He refused to comment on the money he owes.

Why is this allowed to happen?

The Disclosure investigation found that Transform, which provides thousands of operations each year, is using doctors from abroad who fly in to do surgery and fly out.

As a result, when complications occur, surgeons are sometimes no longer in the country to treat their patients, do not provide continuity of care and it is difficult to secure compensation.

The Royal College of Surgeons told the BBC the regulation of cosmetic surgery was too weak and that sometimes patients were left unprotected. It said that in many cases the NHS was left to pick up the pieces.

To perform cosmetic surgery in the UK, you only have to be registered with the GMC (General Medical Council) as a doctor. You do not have to pass specialist training.

Experts told the BBC that patients are not always protected because the UK and Scottish governments have failed to act on the key recommendations of two major reviews – despite the fact the first was published six years ago.

The 2013 Keogh Review found the regulation of cosmetic surgery was poor and warned vulnerable patients were not protected.

It said there should be a compulsory register of cosmetic surgeons. That has not happened. Instead, a voluntary certification scheme has been introduced. However, less than 30 surgeons have signed up.

The Scottish government’s adviser on plastic surgery, Ken Stewart, said the regulation was not “robust”. He called for the certification scheme to be mandatory.

The Scottish government told the BBC it would take additional steps to protect patients – including meeting with UK ministers.

Public Health minister Joe Fitzpatrick said: “Some of this is devolved. Some is reserved. I’d certainly be up for having that conversation to make sure patients are as safe as possible.”

The UK government did not respond to allegations it had failed to make certification mandatory. It said all doctors practising in the UK must be registered and have the right insurance.

‘I can’t bring myself to look in the mirror’

The BBC found other women who had been treated by “fly in, fly out” surgeons whose work was substandard.

Kirsty Adam, from Motherwell in North Lanarkshire, developed necrosis after breast augmentation surgery in 2015. The surgery and subsequent infections did irreparable damage to her areolas, the pigmented area around the nipple, and missing parts had to be tattooed in to conceal the damage.

Transform footed the bill and her expenses for extensive revision work.

Kirsty said: “My confidence in myself is away. It doesn’t matter how well you cover up, you still know in yourself the damage that’s underneath.

“If I go for a shower, I don’t look in the mirror or anything.”

Another patient, Tracey Foley, from Clydebank, was left with open wounds for six months after a procedure four years ago. One nipple was so high and to the side that it was “near enough” under her armpit, she said.

Worse still were the open wounds, caused by her implants being too big, and exacerbated by infections. Tracey said one hole was “deep” and “the size of a penny”.

Like Kirsty, her procedure was arranged through the Transform clinic in Glasgow and performed at King’s Park BMI hospital in Stirling by Romanian surgeon Dr Dana Vasilescu, who worked across the UK for the provider in 2015.

In Tracey’s case, Transform paid for revision surgery and expenses for her to travel to England every week for months for treatment.

The surgeon who returned to Romania

Kirsty complained to the GMC about her surgeon and it suspended Dr Vasilescu from practising while they investigated. The surgeon returned to Romania permanently and came off the GMC register. That meant the case against her was dropped.

If the investigation had concluded that Dr Vasilescu’s work was not up to standard, she could have had conditions imposed on her registration or even been struck off.

The BBC tracked down Dr Vasilescu to the Bucharest hospital where she works but she refused to speak.

Both women tried to get compensation. Transform insisted liability lay solely with surgeons.

Tracey and Kirsty’s lawyers discovered Transform’s surgeons were self-employed and the provider would not pass on contact details for Dr Vasilescu or her insurers.

A Transform spokeswoman acknowledged Tracey, Kirsty and Catherine’s experiences were “not consistent” with its 98% satisfaction rate, and “did not meet [their] high standards”

These cases reflected “individual error on the part of two specific surgeons” who no longer work there, the spokeswoman said.

She said Transform’s use of “world-class international surgical expertise” was “commonplace” across healthcare providers.

The spokeswoman said the company took “absolute responsibility” for patients and the women had “received extensive support including free of charge consultations and revision surgeries”.

She said Transform had “industry-leading aftercare packages which are insurance backed”.

All surgeons at Transform must be GMC-registered, the spokeswoman said, and have UK-based insurance.

She added that if a patient wants to take legal action it must be undertaken directly with the surgeon and their insurers, “as this is where any potential liability sits”.

The spokeswoman said this applied to the “vast majority” of healthcare professionals in the UK independent sector.

Disclosure is on BBC 1 Scotland at 20:30 on Monday 28 October and on the iPlayer.