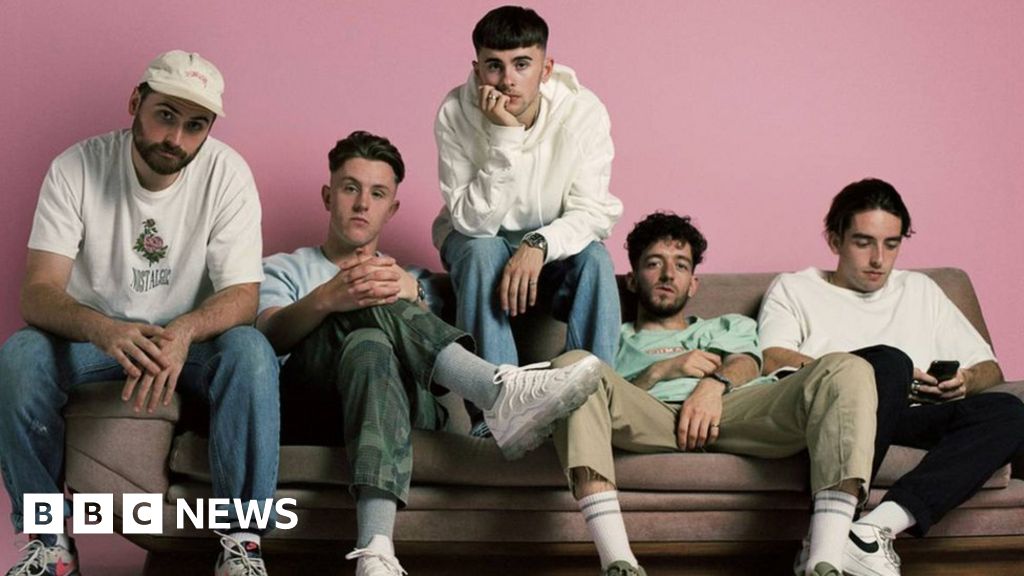 For a band that goes under the name Easy Life, the indie hip-hoppers’ year so far has been anything but.

The genre-straddling Leicester five-piece will arrive at their BBC Music Introducing Live showcase on Friday off the back of their biggest-ever UK tour, two of Radio 1’s Hottest Records and a headline appearance on one of Glastonbury’s smaller but perfectly formed stages.

Throw in several trips to the US to play Coachella (west coast), The Governors Ball (east coast) and South By Southwest (Texas), as well as a video shoot the Moroccan desert and you’ve got yourselves a pretty full-on diary.

Luckily, frontman Murray Matravers feels he’s found the perfect way to de-stress – to undress, and dive headfirst into the crowd in only his undies.

“Being fully-clothed on stage is difficult when you we play for like an hour and a half, or however long we want to play for,” he explains.

“We might be under those lights for a long time and it’s nice to get naked man, it feels liberating.

“Clothes are, you know… we become institutionalised.”

He adds: “A million years ago we would all be running around naked eating berries and things were simpler back then.”

Easy Life’s performance at east London’s Tobacco Dock, alongside the likes of Catfish and the Bottlemen and Annie Mac, is set to be one of the live highlights of a weekend of music industry pow-wows and seminars, supporting budding artists, agents, managers, festival bookers and beyond.

In the spirit of sharing then, what advice does he have for pulling off the perfect semi-naked crowd surf?

“I don’t know man, I’ve got it wrong sort of nine times out of 10!” he admits. “I’ve had people pull my boxers down in the crowd and get a lot more than they bargained for!

“You’re going to have to ask Slowthai or Idles or something, I’m not sure myself. I’m just I’m just dipping my toe in the water so to speak but I’m going to get better.”

You can find plenty of evidence of the more liberated moments of Easy Life’s “messy” tour on the band’s Twitter account, courtesy of a video diary made by their best mate and “talented videographer” Fozza.

In truth, the chilled minimal grooves of many of their early releases, including Nightmares, Pockets their first Hottest Record – the environmentally conscious Earth, don’t seem to lend themselves naturally to a sweaty mosh-pit rave.

As their fanbase has grown, however, this added element of jeopardy seems to have arrived with them mysteriously.

“You know what, I actually have no idea [how that happened],” shrugs the puzzled singer/rapper. “We did not start this culture of stage diving and moshing and all that stuff that kids like to do.

“Genuinely the first time that happened we stopped the song and we were like ‘what are you doing?’ Because it was in a particularly chilled song of ours called OJPL [orange juice and pink lemonade] and live we do like this little jazz break, where there’s not even any drums and the whole crowd just like collapsed on one another.

“When we perform I jump around very very occasionally but a lot of it is quite static and I don’t know why but people just get down. I really don’t know why or how, but I love that they do.”

New track Nice Guys – the second song of the band’s this year to be named by Radio 1 as a Hottest Record – finds them pick up the pace somewhat to a relatively almighty 114 BPM. But on the whole, as they gear up for their debut album, the band seem to be manoeuvring in a lane of their own, switching speeds, guitars, brass and beats at will.

The Easy Life mantra is to make your own kind of music, or you’ll end up making things hard for yourself.

“I think it’s just authenticity,” Matravers concludes. “And just being really real with what it is you’re trying to do, is the most important thing.

“I think too many people trying to write ‘pop music’ in very inverted commas and I was guilty of that myself. I’ve been writing music since I can remember and a lot of the time I was not doing it for the right reasons.

“And then as soon as I started this project, I was like ‘you know what? I’m going to just do this for me.’ I was so done with the whole music thing, and that was when I started working for me, ironically.

“Do it for the love of the music and without trying to sound like a hippie, if you’re doing that then then I think you’ll always be happy.”

Especially if you’re only in your pants.