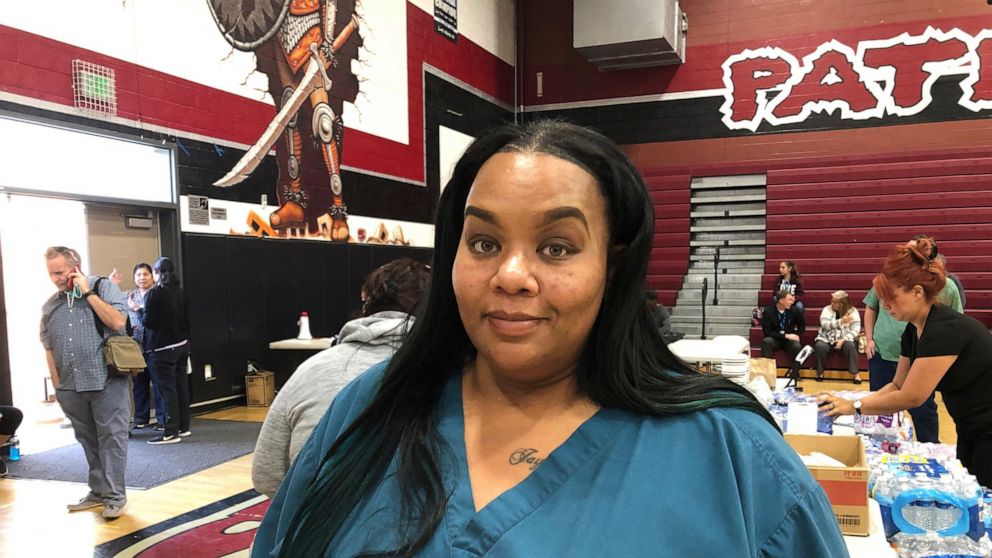 A wildfire pushed by gale-force winds moved with terrifying speed toward a psychiatric nursing care facility Wednesday, leaving caregivers just 15 minutes to evacuate more than five dozen residents, many of them elderly and confined to wheelchairs and beds.

They copied residents’ paperwork, gathered medications and got everyone into a common room while dialing 911 to ask for a bus and ambulances. Workers then put face masks on the residents and wrapped them in blankets before moving them outside to wait for help.

The smoke was so thick they could hardly see, and the flames that started in hills above the Riverside Heights Healthcare Center drew closer.

“There was one moment when I could see nothing but dark smoke and I was like, ‘We’re going to die,'” said Qiana McCracken, assistant director of nursing for the facility.

Bone-dry Southern California was buffeted by Santa Ana winds and fires broke out across the region. The one that threatened the nursing care facility started around 10 a.m. in Jurupa Valley, about 45 miles (72 kilometers) east of Los Angeles.

It temporarily shut down a freeway and forced the evacuation of two mobile home parks and an elementary school, as well as the nursing facility.

McCracken said she first learned of the fire from the relative of one of the residents who called to check in. She said she could see smoke on the hillside, but initially didn’t think much of it until a sheriff’s official came to the door and warned they might need to evacuate.

Fifteen minutes later, the authorities said it was time to go.

McCracken and manager Philip Weinberger said everyone leaped into action. The patients were taken outside and gathered in a wide dirt area across the road. Workers and sheriff’s deputies started loading residents into their own cars to take them to an evacuation center, and ambulances and a bus arrived a short time later to get the rest.

“There’s nobody who once said, ‘It’s not my job,'” Weinberger said. “You couldn’t see, you couldn’t breathe. It was bad for a while.”

McCracken said the staff managed to keep calm, and so did residents, through the ordeal. Once all the residents were out of harm’s way, she got in her own car and broke into tears before heading out.

Authorities opened a shelter at a local high school where residents from the facility and people from the mobile home parks gathered. Some patients rested on cots in the school gym while nursing facility workers reviewed boxes of paperwork and packages of medication.

No one was injured during the evacuation and the nursing facility was saved by the small army of firefighters who flooded the area to fight the blaze. Only one mobile home was damaged.

Nursing care residents were transferred along with staff to temporary facilities.

“It was a crazy day, but the residents are safe,” McCracken said. “And we’re safe.”