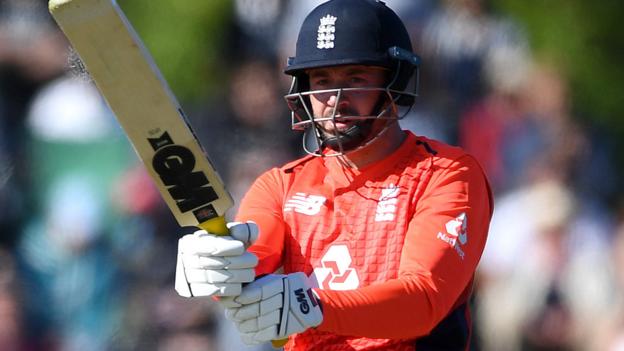 James Vince ensured England began their winter tour of New Zealand on a high with a seven-wicket victory in the first Twenty20 in Christchurch.

Vince struck a fine 59 off 38 balls as England overhauled a target of 154 with nine balls to spare in Chris Silverwood’s first game as head coach.

The second game of the five-match series is in Wellington on Sunday.

England, who have rested several first-choice players, made the most of winning the toss, with New Zealand unable to find any fluency with the bat.

Although New Zealand left-arm spinner Mitchell Santner impressed with 3-23, England were always in control of what proved to be a simple run chase.

Vince has been a source of frustration throughout his international career, often criticised for making attractive starts but not converting them into match-winning scores.

With key players such as Ben Stokes and Jos Buttler missing the T20 series, Vince is among those given a chance to impress before next year’s T20 World Cup in Australia.

He arrived with England 37-1, after an out-of-sorts Dawid Malan was caught at third man, and looked sharp, driving crisply and offering support to a set Jonny Bairstow.

Vince reached his maiden T20 international half-century from 33 balls and looked as though he would lead England home as he hit strike bowler Tim Southee for a towering straight six in the 15th over.

However, with 32 needed for victory, he tamely chipped a full toss from Santner to Martin Guptill in the deep to end a 54-run partnership with captain Eoin Morgan.

Vince’s dismissal may have briefly raised New Zealand’s hopes but Morgan went on the attack before finishing the match off with six over mid-wicket.

Batting was tricky on a slow pitch, but New Zealand were left to rue their sluggish start at the Hagley Oval.

They could muster only seven runs from the opening three overs, with brothers Sam and Tom Curran taking the pace off the ball.

Martin Guptill’s uncomfortable stay was ended when he dragged Tom Curran on, while a mixed Colin Munro innings saw him hit two sixes before being easily caught at mid-wicket.

The hosts stuttered along. The odd boundary was followed by scrambled singles, and it was not until the 14th over, where Taylor and Mitchell came together, that there was any urgency in the batting.

Mitchell drove the bowlers straight while Taylor was more leg side, with the two sharing a 56-run partnership until Taylor was well caught by Bairstow in the final over.

The England bowlers simply got to grips with the pitch quicker than the New Zealand batsmen. Brown impressed on debut, using his variations well in the final overs, while Jordan was accurate.

It was a pleasing start for former bowling coach Silverwood, who took over from Trevor Bayliss in October.

England captain Eoin Morgan on Test Match Special: “We’re very proud of the way we played today. The game was won and lost in the first innings.

“James Vince really was exceptional. He’s very easy on the eye when he plays well, but on a wicket that doesn’t necessarily allow the shots that he played today to be played, it just shows how classy a player he is.”

England batsman James Vince on TMS: “There are some world-class players not here, but it gives me and some other guys a great chance to stake a claim with the World Cup next year.

“I don’t think there are many spots up for grabs, so it’s going to be a tough one to break into. Hopefully it will be nice to get a run of games.”

Ex-New Zealand captain Jeremy Coney on TMS: “Some people bat like accountants, but Vince doesn’t at all.

“There was a lot to be gained – and England gained a lot more than New Zealand from the day. All the England bowlers can be relatively satisfied with how they’ve started this series.”

England bowler Steven Finn on TMS: “That’s the James Vince that I’m so used to bowling at in domestic cricket. He is an outstanding player, there is no doubt about that. He’s a class player.

“There’s always a cloud over his head, which is slightly unfair because I know how good a player he can be.

“If he can replicate how he plays for Hampshire in this series that will bear him in good stead.”