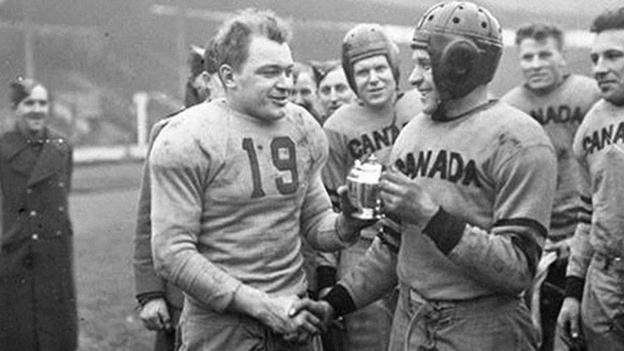 American football has been one of the fastest growing sports in Britain over the past decade. Its cult following goes back further to the 1980s.

Such has been the growth that since 2007 there have been 27 regular season NFL games held in London, including two this autumn at the multi-purpose Tottenham Hotspur Stadium, with another to follow at Wembley on Sunday when the Jacksonville Jaguars face the Houston Texans.

The venue was White City and twice in 1944 it was the stage for gridiron encounters between forces teams from Canada and the United States.

In winter, 1943 a Canadian army major was sat in an Aldershot pub with a group of fellow officers.

Denis Whitaker had seen a lot of action during World War Two since he enlisted three years earlier. Before the war he was a top quarterback for the Hamilton Tigers in the CFL.

Maj Whitaker was part of the Dieppe raid in 1942 and had seen many men killed in that costly assault.

Troops were feeling the pressure of intensive training in the “miserable” cold winter, for what would be the invasion of France.

“I started talking to a fellow next to me, who turned out to be a lieutenant in the American Army Recreational Services,” Whitaker told his stepdaughter, Martie Whitaker, many years later.

“He mentioned that he was pretty interested in football and had just brought over six complete sets of equipment for football teams.

“I knew a number of Canadians serving in Britain who had played pro or college football, so several beers later I found myself talking this fellow into lending us some uniforms and putting together a USA v Canada match.”

Whitaker, who would later be promoted to brigadier general, was a natural leader.

“At that time in the war not very much was happening,” said his daughter, Gail Thompson.

One game – two sets of rules

Whitaker convinced Canadian Lt Gen Ken Stuart that the game would be a morale booster for the units and a date for the match – dubbed the Tea Bowl in a nod to the troops’ British hosts – was set for 13 February 1944.

The BBC provided the outside broadcast engineering for the American Forces Network’s radio coverage of the game.

Programmes included a list of rules to help the British spectators understand what they were witnessing on the field.

The Tea Bowl was played in front of 30,000 people and spitfires flew overhead, on the lookout for the German Luftwaffe.

Playing American rules in the first half, neither side scored.

But the switch to Canadian rules at half-time brought points in the second half.

Canada scored five minutes into the third quarter when Capt Ken Turnbull pounced on a fumble. Whitaker kicked the conversion.

The score was tied five minutes later when Cpl Ben Detterman caught a pass, eluded three defenders and ran 35 yards for the touchdown.

Touchdowns from Lt Orville Burke, quarterback for the Toronto Argonauts, and Maj Jeff Nicklin, running back for the Winnipeg Blue Bombers, sealed a 16-6 win for Canada.

When asked about the game in April 1996, Turnbull said: “It was terrific. We got out of the army for two months and had fun.

“The esprit de corps was terrific, they were all damned good fellows and we were serious about winning.”

US calls up NFL stars for rematch

Smarting from their loss, the Americans demanded a rematch.

The Coffee Bowl was played on 19 March 1944 and 50,000 spectators filled White City Stadium to witness a US team with NFL players.

The star of the second game was Sgt Tommy Thompson, quarterback for the Philadelphia Eagles, who was drafted into the American side.

Joe Horrigan, executive director of the Pro Football Hall of Fame in Canton, Ohio, describes Thompson as being a “very good” quarterback.

Thompson was nominated on numerous occasions for the Hall of Fame, but failed to be voted in.

He won two championships with the Eagles in 1948 and 1949. His family donated his championship ring from 1949 to the Hall of Fame.

“Tommy Thompson was one of these guys that was, what you would call, a real throwback in pro football,” said Horrigan.

“He was the tough quarterback that we now see re-emerging that can run, who could throw and he did all with a visual impairment.

Thompson’s niece, Sharon Early, said that her uncle was blinded as a child. He and his sister were throwing stones at one another and she caught him in the eye.

His disability didn’t stop him. He led the Americans to a 16-0 win over a Canada side missing Nicklin, who chose not to play because he felt the risk was too great before the forthcoming invasion of Normandy.

Whitaker did feature despite having added duties after being promoted from major to lieutenant colonel between the two games.

The number of ringers that the US recruited did not go unnoticed by their opposition.

“I came face-to-face with this guy with a deep suntan,” remembered Capt George Hees, a former Toronto Argonaut in the CFL.

“Remember, we’re in England and this is March. They’d brought this guy in from Hawaii, so we lost. But the first game? We beat those sons-of-bitches.”

Two of the players from the Tea Bowl never made it home.

In March 1945, just weeks before the end of the war, Nicklin and his group of paratroopers undertook a mission along the Rhine.

After jumping out of his plane, his parachute got tangled in a tree near a placement of German guns and he was shot dead.

Hank Living, a CFL player for the Sarnia Imperials, had a premonition before his death.

Sarnia historian, Tom Slater, explained: “He had this fear, because of his size, that if his plane were to go down he wouldn’t be able to escape out of the hatch.

“Inevitably that is exactly what happened. Their plane had gone on a bombing mission to Germany, it was attacked and went down.

“Eyewitnesses reported that there were no parachutes seen coming out of the aircraft and it went straight into the ground.”

There were 19 NFL players, one coach and one administrator, that died in WW2 during military service.

One who lost his life, Lt Jack Lummus, who played for the New York Giants, was awarded the Medal of Honor, America’s highest military honour, for “conspicuous gallantry and intrepidity at the risk of his life above and beyond the call of duty” in action against Japanese forces on Iwo Jima on 8 March 1945.

One other NFL player and a man who became one of American football’s leading administrators were also awarded the Medal of Honor during WW2.

Lt Maurice Britt, of the Detroit Lions, learned he had been honoured for his bravery at Mignano, Italy, in November 1943, when he almost singlehandedly beat back a German counter-attack on his position, while on a hospital ship after losing his right arm at Anzio a few months later.

And US Marine Corps pilot Capt Joe Foss was cited for bravery in air combat after being credited with shooting down 26 Japanese aircraft during the Guadalcanal campaign.

Foss went on to become commissioner of the American Football League, which competed with the National Football League before eventually merging with it in 1966.