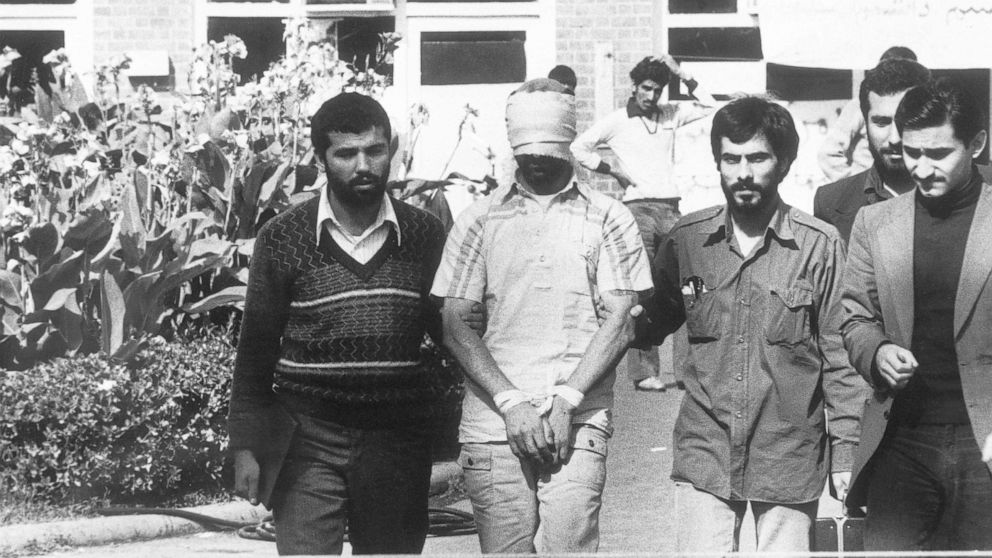 After a three-hour struggle, the students took hostages, including 62 Americans, and demanded the extradition of the deposed Shah Mohammad Reza Pahlavi, who was receiving medical treatment in the United States for the cancer that ultimately would kill him. Some hostages would later be released amid the crisis, but it would take over a year for all to be freed.

On the day of the takeover, The Associated Press actually had no presence in Iran. Two months earlier, Iranian authorities had shut down the AP’s bureau in Tehran, throwing out four foreign correspondents for the cooperative over its reporting of a Kurdish uprising in western Iran. Two Iranian staffers for the AP were ordered to stop working for the agency.

The AP story shows how the agency adapted, relying on bureaus around the world to monitor broadcasts and make calls, including its Middle East headquarters, which at the time was in Nicosia, Cyprus.

Iranian authorities ultimately relented and allowed the AP to resume its news operations. But by January 1980, Iran threw out the AP and all American journalists. The AP ultimately would return to Iran and re-establish a presence in 1995 and later a bureau that it still operates there today.

Now, 40 years later, the AP is making its story and photos of the U.S. Embassy takeover available. The story has been edited for typographical errors, but maintains the AP style of the day.

A mob of Iranian students overran U.S. Marine guards in a three-hour struggle Sunday and invaded the American Embassy in Tehran, seizing dozens of staff members as hostages, Tehran Radio reported. They demanded that the United States send the exiled shah back to Iran for trial, the radio said.

No serious injuries were reported. Tehran Radio said as many as 100 hostages were being held, but an Iranian Foreign Ministry spokesman said he believed it was fewer than 45 — about 35 Americans and seven or eight Iranians.

The spokesman, reached in Tehran by telephone from New York, said an estimated 200 or 300 students were involved.

In Washington, State Department spokesman Jack Touhy said it was estimated 59 persons were being held captive and there was no firm evidence the invaders were armed. He said a State Department working group was set up to monitor the situation and added the U.S. government would have no immediate comment on the demand that the shah be returned to Iran.

The Tehran Radio broadcasts, monitored in London, said the embassy’s Marine guards hurled tear-gas canisters but were unable to hold back the waves of students. None of the broadcasts mentioned any weapons besides the tear gas.

Japan’s Kyodo news service reported from Tehran that the invaders called a news conference in the embassy compound and a sweater-clad man in his mid-20s told reporters, “We will continue to stay here and won’t release any of the hostages until the United States returns the ousted shah, which is what the Iranian people want.”

There were reports that the hostages were blindfolded and handcuffed. The Foreign Ministry spokesman denied this, saying the embassy takeover was “a very peaceful exercise. They are dealing with them very nicely.”

But television film broadcast in some Western countries showed a few hostages in front of an embassy building who were blindfolded and either bound or handcuffed.

Asked if the students were armed, the Foreign Ministry spokesman said he had heard no reports that they were.

He said a Scandinavian ambassador in Tehran would act as a mediator “to try to convince the students to get out of the compound.” He reported an Iranian Moslem religious leader also was trying to talk the invaders into leaving.

The spokesman, who asked not to be named, said he was unsure of the identities of the two mediators.

The State Department said in Washington the Iranian government had “given assurances that our people being held are safe and well.”

Tehran Radio said the Marines and other “mercenaries” — not further identified — were safe in a room and “No violent action has been taken against them.”

An official at the British Embassy, reached by phone from London, said it appeared “as though the hostages are having to spend the night in the basement. There is no knowing how long they are going to be held.”

The Foreign Ministry spokesman said that after the takeover thousands of other Iranians converged on the spacious embassy compound, on a major avenue in central Tehran, and milled around outside, shouting anti-American slogans.

Just hours after the embassy invasion, seven demonstrators chained themselves inside the Statue of Liberty in New York Harbor to protest the ousted Shah Mohammad Reza Pahlavi’s presence in New York, where he is hospitalized for cancer treatment. After 3 1/2 hours authorities cut the chains and took them into custody.

Pahlavi went to New York last month on a special medical visa and underwent gallbladder surgery and testing. Doctors recommended he stay in the United States for six months to a year for drug treatment of his cancer. He fled Iran in January and later took up residence in Mexico.

The Tehran broadcasts, some not clearly received, said the students were motivated by a “message” from the leader of Iran’s Islamic revolution, Ayatollah Ruhollah Khomeini.

The Iranian Embassy in Washington released a statement issued by the Foreign Ministry in Tehran after the takeover accusing the United States of engaging in an “imperialist plot” to reinstate the former monarch. Iranian officials have claimed the deposed ruler is faking illness.

“The action taken today by a group of our countrymen reflects the natural feeling of the Iranian nation towards the U.S. government’s disregard” of an official Iranian protest of Pahlavi’s presence in New York, the statement said.

It said the U.S. government ignored the protest and refused to allow two Iranian doctors living in the United States to examine the shah, who could have been treated in Mexico or another country.

“The people of Iran were extremely concerned about any relocation and activities of the shah and … would consider the shah’s illness a pretext for his going to the United States in order to have access to better activities against the Islamic revolution in Iran,” the statement said.

State Department spokesman Touhy said the U.S. charge d’affaires in Tehran, Bruce Laingen, and two other American officials were at the Foreign Ministry at the time the embassy was seized, and had contacted Iranian Foreign Minister Ibrahim Yazdi. No U.S. ambassador currently is assigned to Tehran.

Touhy said Laingen remained at the ministry, negotiating with officials there, and negotiations were not being conducted with the embassy invaders. He said families of U.S. personnel held in the embassy were being advised that the hostages had not been harmed. He did not release any names of the Americans.

This was the second time the embassy has been taken over since the revolution. Gunmen believed to be renegade revolutionaries invaded the embassy last Feb. 14, killing one Iranian and taking 101 hostages, including Ambassador William Sullivan and 19 Marine guards. Pro-Khomeini forces drove the insurgents from the badly damaged compound after 3 1/2 hours.

A Baghdad Radio broadcast reported that Iraq had lodged a strong protest with Iran over what was described as an attack on the Iraqi Embassy in Tehran Saturday and the abduction of four persons. The Khomeini regime accuses Iraq of aiding autonomy-seeking minorities in Iran.