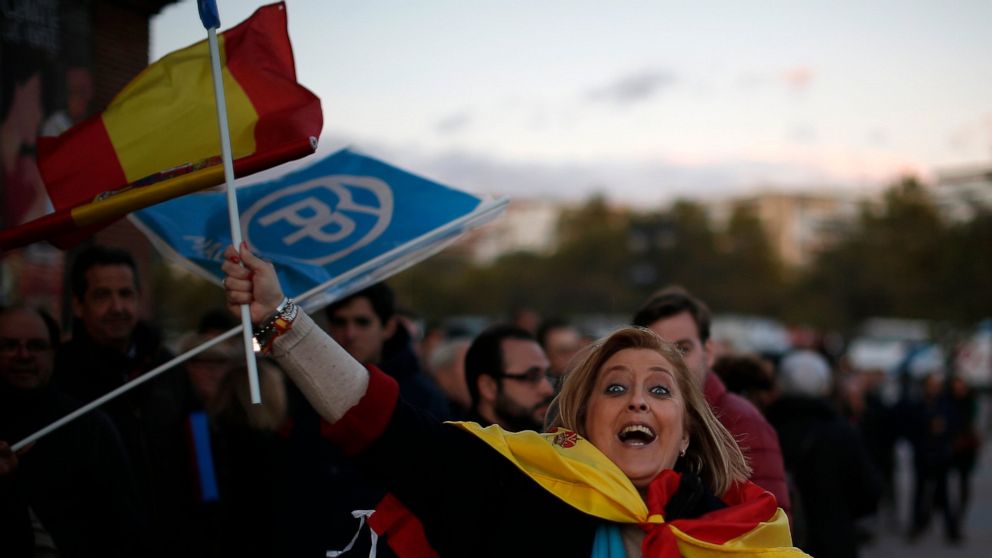 Spain is back at the polls for the fourth time in four years with violence linked to Catalonia’s regional secession push and a predicted surge in Spain’s nascent far-right party dominating the election campaign. Here’s a look at why the country is voting once more, and what might come out of the election.

WHY IS SPAIN VOTING AGAIN?

Spain’s 37 million voters are being asked to vote because incumbent Socialist Prime Minister Pedro Sánchez, who won most votes in the last election on April 28, failed to muster enough parliamentary support to form a government, and no other party leader could either.

The stalemate was a consequence of Spain no longer being a two-party state following the emergence of one leftist party and two rightist groups in the wake of the global economic crisis that hit Spain hard.

With no experience in forging coalition governments, party leaders are finding it hard to strike deals.

The continuing push by the economically powerful northeastern region of Catalonia to secede from Spain and the Spanish government’s handling of the problem is undoubtedly the top election issue.

Sunday’s vote follows last month’s sentencing to prison terms of nine politicians and activists who led a 2017 drive for independence. The ruling triggered massive daily protests that left more than 500 people injured, roughly half of them police officers, and dozens arrested.

Sánchez has been accused of going too easy on the pro-independence movement in the hope that secessionist parties might support him in the national parliament. The three right-of-center parties promise to crack down on Catalonia and have used the conflict to whip up support for Spanish national unity.

Thousands of extra police have been deployed to the region for the vote.

FRANCO AND THE FAR RIGHT

Until recently, no far-right group had had a seat in the national parliament since Spain returned to democracy after a near four-decade right-wing dictatorship under Gen. Francisco Franco, who died in 1975.

But that changed in the last election when Vox (Voice) erupted onto the political scene, winning 24 seats on promises of taking a hard line on Catalonia and immigration.

The Socialists’ April victory was nevertheless seen as respite from the right-wing gain in ground across the continent. Attention is likely to be focused on whether Sánchez can do it again.

But many polls predict Vox, headed by Santiago Abascal, may do even better this time and capitalize on the rightist sentiment that surfaced in response to the government’s exhumation of Franco’s remains last month.

Vox has already joined forces with the other two right-of-center parties to take over many city and regional governments.

Behind top contender Sánchez there is the conservative Popular Party leader Pablo Casado, who has managed to regain some ground after the electoral debacle in April that left his party with 66 seats, the fewest ever.

Casado is on friendly terms with both the pro-business Citizens party of Albert Rivera, which currently has 57 seats, and Vox’s Abascal.

To the left of the Socialists, voters angry with austerity measures have the United We Can group led by Pablo Iglesias. It currently has 42 seats.

WILL THE ELECTION CHANGE ANYTHING?

Not likely, according to experts who predict another fragmented parliament.

Sánchez is tipped to win again but fall far short of a majority, and there are no signs that any other group is willing to back him without demanding a high price.

His best bet will be to try again with United We Can, but Iglesias insists on being part of a coalition government, something Sánchez has resisted.

The odds are that the country will be faced with several months more of interim government while the parties haggle over a deal.

Abstention is a major threat, with polls suggesting up to 35 percent of the electorate could stay away from the polling booths.

Besides dealing with Catalan secessionism, the next Spanish government will also have to seek ways of easing chronic unemployment, maintaining economic growth and ensuring the Brexit issue does not rock its key agricultural and tourism sectors.

Economic growth is expected to wane slightly to 2 percent in 2019, although that is still twice the average European Union rate.

Unemployment has eased since the financial crisis, but 14 percent of the workforce are still out of work, one of the highest rates in the EU.