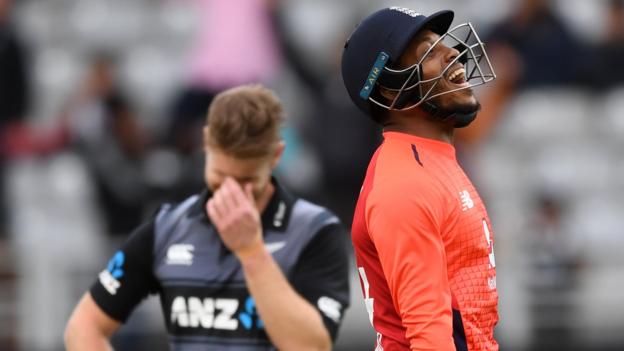 England, New Zealand and a super over. Sound familiar?

Almost four months after the World Cup ended with a dramatic super over, the deciding Twenty20 in Auckland went the same way.

England, chasing 147 in a rain-affected 11-over game, needed 16 runs from the final over to wrap up the five-match series.

When England lost Tom Curran to the third ball of the over, needing 13 to win, it looked as though New Zealand might edge it.

That was before Chris Jordan stepped up to hit 12 off the final three deliveries and force a super over.

Because of course it would end in a super over. Of course.

Jofra Archer, who bowled the over that clinched England the World Cup and is in New Zealand preparing for the Test series, was keen to get in on the action.

As Jonny Bairstow and Eoin Morgan walked out to bat, everyone’s minds turned back to the deciding factor at Lord’s.

But England ran out comfortable winners in the end, hitting 17 off their six balls before Jordan restricted New Zealand to just eight in response.

Bairstow described it as “manic”, Morgan said it was “epic”, while New Zealand skipper Tim Southee said the coincidence was “not that funny but great entertainment”.

Will it happen again? Not if Bairstow has anything to do with it…

“We don’t want to keep making a habit of super overs,” was his parting line.