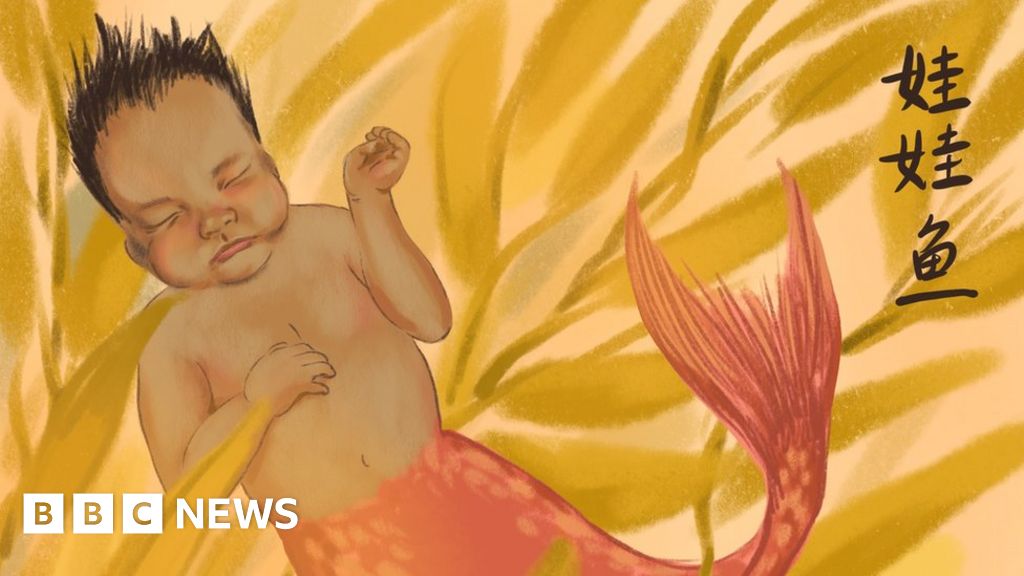 What do you get when you cross a baby with a fish?

It’s not the start of a dad joke, but one of a series of pictures drawn by Shanghai-based illustrator Frankie Huang.

Chinese is already one of the most pictorial languages in the world, but she’s taking it to the next level – by literally turning words into pictures. Her series, Putong Animals, re-imagines animals according to what they’re called in Mandarin Chinese – or Putonghua – the official language of China.

In Mandarin a zebra, for example, is literally a “patterned horse”. The dolphin has unflatteringly been turned into a “sea pig”.

Frankie says she came up with the idea for the series after seeing people on Twitter discussing how some animals had “really funny names when you translate them literally”.

“I realised no-one had done a series of this and I thought to myself ‘I suppose it’s time then’,” she told the BBC. “I wanted to create something that was not just pretty but also interesting.”

“The turkey – or fire chicken – was the first one I drew. It was just a bunch of chickens on fire and a guy in a hazmat suit feeding them,” she said. “You can see that my technique actually developed as I got more into it.”

Frankie was born in the Chinese capital, Beijing, but grew up in the US, exposing her to both English and Mandarin from a young age.

“I’m both an outsider and insider [to the Chinese language] because of my upbringing, I think sometimes you need to be an outsider in order to really appreciate something,” said the illustrator.

Another one of Frankie’s favourite illustrations is the “dragon prawn” – or lobster.

“I wanted to make it look really majestic and godlike,” said Frankie. “Someone commented that it’s a celestial crustacean, I thought that was such a nice name for it.”

It takes Frankie around three hours to produce one illustration, from conceptualisation to sketching it out and eventually colouring it in.

She has for now completed her series on Putong Animals, but she is looking into turning the animals into characters of their own.

“Even as far back as ancient Greece with Aesop’s fables, people were telling stories through animals,” she said.

“I actually started to write a story about the lives of the fire chicken. They’re on a planet where people use them in their lives, [like] putting them under their beds during winter to keep them warm. I want to eventually give them more personality.”

But it’s not just animals that she illustrates – she’s also delved into Chinese phrases.

This picture showing a cat in a pipe is meant to illustrate the Chinese phrase “xi mao”, which literally translated, means to “inhale cat”.

It’s a phrase that’s spread across young people in China, to describe someone who is a cat addict.

Another one she’s done shows stuffing spilling out of a dumpling – a literal translation of the Chinese phrase “lou xian”, or “for stuffing to leak out”. The phrase refers to a situation where truth is revealed.

“If you look closer, you’ll actually see some tentacles coming out of the dumpling, because I drew it after I watched Stranger Things 3,” Frankie laughingly admits.

But she’s of course not the first person to have put a clever play on Chinese words – and sometimes others have done so for more political reasons.

Social media in China is heavily censored, and its not uncommon for social media companies in China to remove “sensitive” content. This was one of the obstacles that #MeToo – the movement that encouraged people to openly talk about their experiences of sexual harassment – faced in China.

The phrase #MeToo was heavily censored but to get around this, many instead began posting the Chinese words “rice bunny”, which is pronounced “mi tu” in Mandarin.

“One of the things that made me look more closer into pulling together and dissecting the Chinese language was the [phrase] mi tu,” said Frankie.

“The censorship forces [Chinese people] to constantly stay ahead of the government so they come up with these wonderful creations, sort of like how diamonds are created under enormous pressure. All these gems of wit are found on the Chinese internet.”

This is part of what Frankie hopes her illustrations will do – help people to recognise “humour and wit of the Chinese culture”.

“I want to hopefully reach more people to help them be interested in the Chinese language and culture,” she said.

“In this day and age, China is in the press constantly. [I want to show] there’s so much more to China than just the politics.

“I want to be independent of all these things and show people that you can love and enjoy the culture without all the politics. The politics are new, but this [language] is not.”