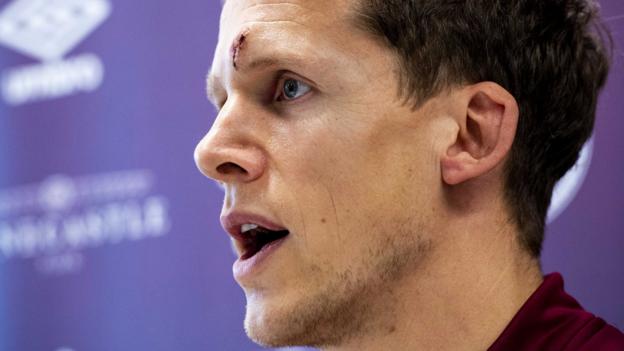 Captain Christophe Berra says managerless Hearts have “good players but are not a good team” as they continue to struggle in the Scottish Premiership.

The Tynecastle club are one point off bottom place with just two wins from 15 games.

Austin MacPhee’s team were also held 1-1 by Livingston at home on Wednesday.

“The points show that. We need a big improvement in our performances in our games,” said the defender.

“Individuals, everything, we need to gel as a team. There are a lot of games to still play for but the games start getting less and less. We need to make sure we are on it. We are in for a fight no matter what.

“It’s tough. No team is going to lie over. Teams are better prepared this day and age in this league. Teams may not have as good so-called individuals but they are more difficult to beat.”

Berra admits there has been an angst at the current state of uncertainty that has enshrouded the club since Craig Levein’s sacking in October.

Former Barnsley boss Daniel Stendel appeared set to take over as manager on Tuesday, however an issue over compensation with the Championship club continues to drag on.

“We just need to win games at the moment. Someone new will be coming in. Whenever that will be I’m not sure, I’m sure it will be sooner than later,” added Berra, whose side travel to Motherwell on Saturday.

“We are like anyone, there is frustration. But our job is to turn up at training and do what Austin wants to do, or on a Saturday and try to win games. That’s been the biggest frustration.

“I’m sure it will give us a big lift when someone comes in. We do need it, there’s no doubt about that. I think everyone can see it.

“I’m sure they will be working extremely hard to get it over the line.”